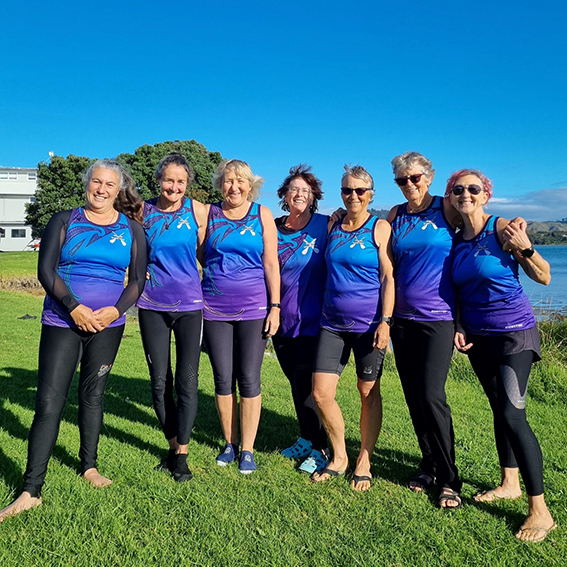 Two waka ama teams from around the Valley have been given a cash injection from the district council in order to get them to London.
Hauraki Waka Ama Club’s Whaitere Gold team, and Te Āputa Tira Hoe Waka Ama Club’s Te Au Hīirere team have been selected for the world champs in London this August.
Whaitere Gold’s club coach Gillian Tata Henry, of Paeroa, has also qualified in the single canoe races. Two of the seven crew members travelling with the Whaitere Gold squad are from the Hauraki district and the rest are from Waihī Beach, while Te Āputa Tira Hoe operate out of Te Puru and Turua and train on the Waihōu River.
“I think this is an opportunity to showcase the Hauraki district,” Plains ward chair Ross Harris said. “We’ve got money sitting there we haven’t used; it’s our rangitahi… I’m in support.”
The sentiments were shared by a full house of councillors at the May 25 meeting, and it was decided to provide a grant of $1500 to each waka ama team, split evenly between the Paeroa, Waihī, and Plains Ward Community Assistance Funds. It was noted that Mayor Adams would also provide a financial contribution directly from the Mayoral fund.
“I’ve seen them train, I know them personally, I’ve watched [them] develop waka ama since over a decade ago, so to see this and hear that they’re going to represent our region at the world champs in London, I think it’s a give-in that we support them,” Paeroa councillor Rino Wilkinson said.
“When they come back, whatever the outcome, it’s going to be huge for us.”
Te Āputa Tira Hoe’s under 19 team, Te Au Hīrere, will be sending a crew of 11 to London – made up of seven paddlers, two coaches, and two managers – and is needing to raise $42,000. Hauraki Waka Ama Club’s Whaitere Gold team needed to raise $35,000.
The unanimous decision to support the clubs – made within 10 minutes, was a “proud” moment for Mayor Toby Adams.
“It’s days like this that never used to happen… where we forget about who it is [making the funding application] or where they rest their head at night, and think about the district as a whole and how it can benefit the community,” he said.
“It makes me immensely proud to be the mayor, it truly does.”
DETAILS: The IVF Va’a World Sprint Club Championships, London, England, from August 7-August 16.