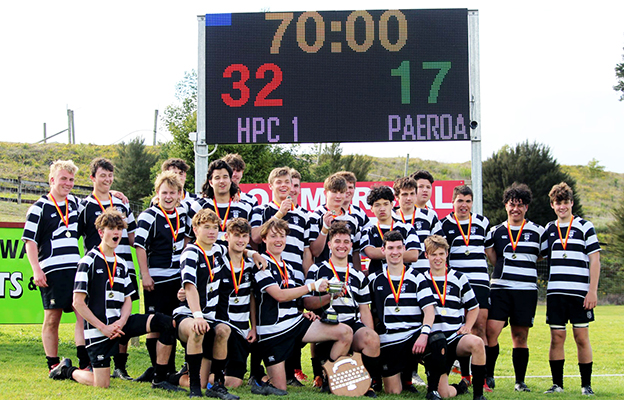 The HPC First XV were the Coulter Cup winners in 2020. This year, the college has opted out of the Thames Valley competition. File Photo: SUPPLIED

A decision by Hauraki Plains College to pull its First XV boys team out of the local rugby competition will be a “dark cloud” hanging over the Thames Valley Rugby Football Union as it celebrates its centenary this year, the union says.
The college made the decision last month to withdraw from the Thames Valley First XV competition to instead play in the Counties Manukau Rugby Football Union First XV competition.
College principal Ngaire Harris told The Profile they had “no issue with Thames Valley Rugby”, but the school’s sports executive, supported by the board of trustees, made the decision for what they believed would “ultimately be in the best interests of players and for the development of rugby at HPC at this point in time”.
Union general manager Paul Nisbet said it meant Hauraki College players would not be eligible to be selected into the Swamp Foxes if they were not playing with a club in a competition under the control of the union.
“It would be like us picking Auckland Grammar or Kelston Boys’ High School players who don’t make Auckland rep teams. There’s nothing fair or appropriate in that.”
He received an email from the school on April 12 that said the switch was to cater to a number of players who came from Bombay, Pukekohe, Hunua, and Clevedon – areas outside of the college’s enrolment zone.
It was a “baffling” decision, he said, and the union was not aware how many players were affected.
The Profile asked the college how many of its First XV players came from outside of the district, but the question was not answered.
“Right now, having our First XV reduced to four teams, because of reasons we still do not fully comprehend, is extremely disappointing,” Mr Nisbet said.
“Having said this, the quality of First XV players on display so far this season is excellent and provides a solid foundation.”
The college dominated the local First XV competition from the mid 80s, through to the early 2000s; however, the college has only been First XV championship winners of the Coulter Cup three times since 2003.
Kelly Plummer, Thames Valley Rugby historian and long-time stalwart of the game in the region, said to lose the college’s First XV team from the competition was “a dark cloud hanging over the union in its centenary year”.
“Bert O’Brien, an outstanding Hauraki Plains College principal of yesteryear may well be turning in his grave over the fact that all the work he did to build up rugby in HPC and Thames Valley secondary schools in the 1970s has this shadow cast over it,” he said.
Hauraki Plains College old boys Brian McCollum, David Dillon, John Corbett, and Karl Davis were Swamp Foxes of the past, Mr Nisbet said, while three of the union’s nine centurions – those who have played more than 100 games for the Swamp Foxes – were also HPC old boys: Richie Taylor, David Harrison, and Butch Campbell.
“We truly value HPC’s involvement in our competitions and will welcome them with open arms if they can remove perceived barriers and continue playing in their traditional catchment; in the community that cares for them and wants what is best for the school and its players,” Mr Nisbet said.
“We give that commitment not just because of our long-standing relationship with HPC, but on behalf of the other schools in our province that are now adversely inconvenienced.”
Three other Hauraki Plains College rugby teams – senior girls, junior girls and junior boys – will continue to play in Thames Valley competitions.

MEMORIES AND MONARCHS AT NEW GARDEN