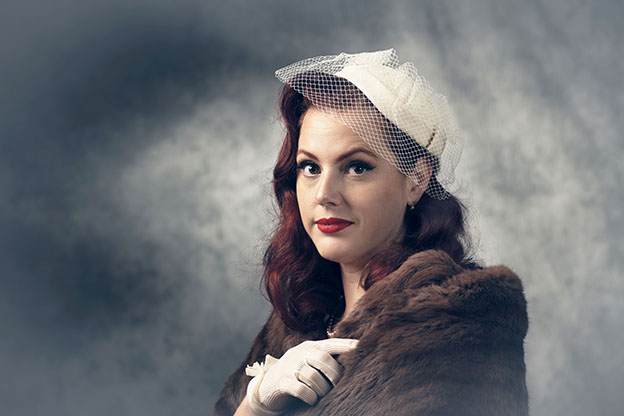 Like most people, Katie McLaren went through “an emo phase and a grunge phase”, but once she found vintage fashion, she finally found where she belonged.
Now Paeroa’s resident pin-up has been chosen as one of the country’s top ten to vie for the first-ever Miss Vintage Australasia crown this September.
“I do stand out like a sore thumb walking around the streets of Paeroa, but it is quite empowering, being noticed and being pulled up on the street and getting compliments. It’s because it’s something different,” she tells The Profile.
“I’ve always been a little bit, in my earlier years, on the down-low because kids can be a bit rough at school… but you get past the age of 30 and don’t care what people think.”
Katie, wearing a vintage yellow cardigan with her hair pulled into a retro up-do, has often been dubbed ‘the best dressed woman in Paeroa’ for her daily rockabilly outfits, but her foray into the world of pin-ups only began after returning to New Zealand three years ago from Australia, where she worked in an antique store.
“I did dress quite vintage-y when I was working there, and I listened to the jazz music while surrounded by all the beautiful antiques and jewellery,” she says.
When she arrived on home soil, she connected with the wider pin-up community, and finally found where she “belonged”.
“And I don’t think that will change going forward,” she says.
The Miss Vintage Australasia pageant is part of a new event called VintageFestNZ, held in Christchurch in September.
Katie was chosen as one of the top 10 finalists and will compete against nine other women from across Aotearoa. Despite being dubbed an Australiasian event, Australian competitors will not be part of the line-up due to Covid-19 restrictions and concerns.
“I plan on entering Miss Pinup New Zealand next year, so I wanted to do this as a confidence booster, to get myself ready for that, and also to push my comfort zone out a bit,” she says.
Katie has entered smaller pageants at Beach Hop events and car shows across the country, but says Miss Vintage Australasia will be her most “intimidating” pageant yet.
She’ll have to showcase three outfits: summer wear, day wear and evening wear, with the latter being her “biggest hurdle”.
“I’ve started to dabble in making clothes, and I plan on attempting to make my evening wear for the pageant,” she says. “It’s a bit of a massive mountain to climb because evening wear involves a lot more material; you have to sit down and design the dress and come up with the fabrics, but I’ve got lots of friends in the community who are sewers and they’ve given me advice.”
Pageant competitors usually coin a moniker to use while on stage, but she simply goes by ‘Katie Emma’ – a mash-up of her first and middle names.
“I was dabbling with what I could be called, but I didn’t really want a label. Katie Emma was always what my grandmother used to call me… so it resonated with me a little bit because she passed away a couple of years ago.”
Katie, who is a member of Paeroa Rotary and a dancer with local rock ‘n’ roll group The L&P Rockers, will be turning 36 while down in Christchurch, and will be gearing up for the pageant by attending events, including the Rotary Vintage Car Show and Swap Meet, set for September 17.
“I’ve always liked op shopping and getting vintage clothing, but it’s always been on a spectrum of change as peoples’ dress senses evolve,” she says. “Everyone goes through an emo phase and a grunge phase, but I feel like this is where I sit now.”
DETAILS: For info on the pageant, find Miss Vintage Australasia on Facebook, or connect with Katie on Instagram: katieemma