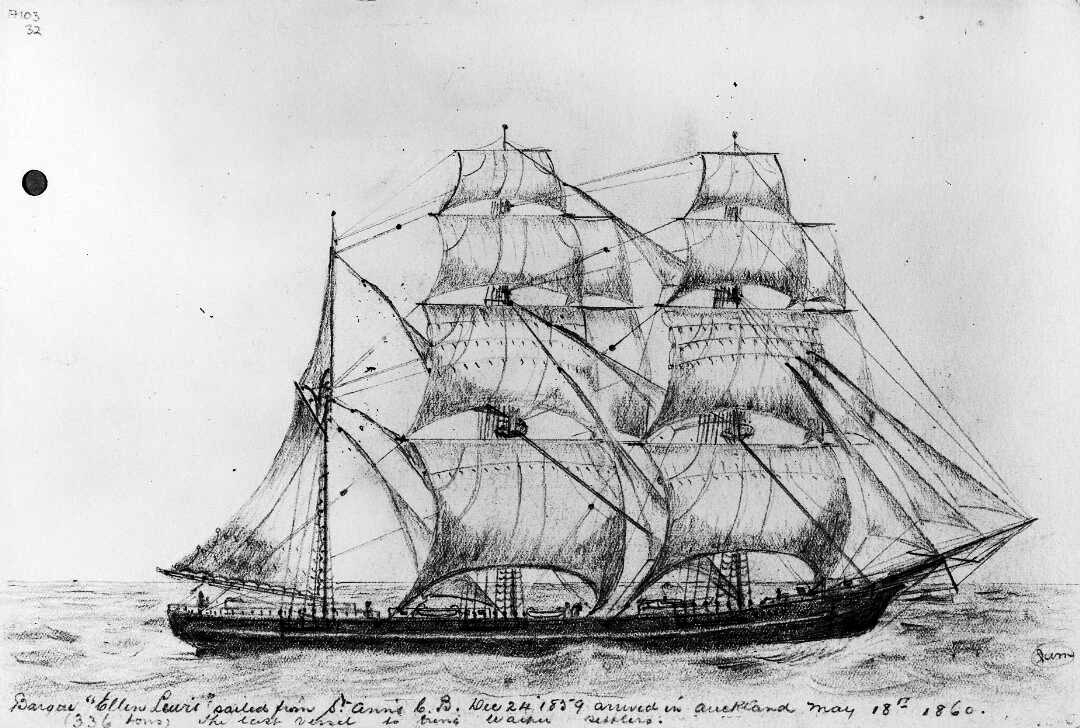 The Ellen Lewis, the last vessel to bring Normanite settlers to New Zealand.

Miss Flora McLeod was 100 years old in 1874, an extraordinary age to reach for the times. But Flora, who lived at Tapu, was known for remarkable achievements at significant ages.
She had been born on the Isle of Canna, in the Scottish Inner Hebrides. Her family had suffered from the Highland Clearances where tenants in the Scottish Highlands and Islands were evicted.
They were relocated to the coast where farm sizes, known as crofts, were too small. Crofting communities struggled and many Highlanders fled to the island of Cape Breton, Nova Scotia, Canada, including, in 1830, Flora by then in her late fifties.
Flora became part of the McIsaac household. They had settled at Broad Cove, Cape Breton in 1812. Alexander and Mary McIsaac were to have ten children who Flora helped with.
Life on Cape Breton was dominated by the Reverend Norman McLeod, a tyrant of a minister whose followers were called Normanites. He imposed harsh punishments for trivial ‘sins’ but despite his fanaticism was faithfully obeyed. His devotees were God fearing Gaelic speaking crofters, fishermen and modest women. They were hard workers who built homes, developed farms, established businesses and built ships.
By the 1840s, the community was flourishing but in 1845 it was hit with a disastrous famine. McLeod’s son, who had gone to Australia, sent back details of opportunities and fertile land. Attracted by this, the Normanites began leaving for Australia in ships they built themselves, but Australia proved unsuitable. The quest turned to New Zealand.
The first group of Normanites arrived in Auckland in September, 1853. They settled around Waipū, a coastal area of virgin bush where their Highlander skills could be utilised.
After the death of Alexander McIsaac’s wife Mary, the family left for New Zealand in December, 1859, aboard the Ellen Lewis, the largest of the Normanite fleet. Alexander’s nephew, Angus, went with them.
Flora was an astonishing 86 years old when she undertook the 162 day journey along with the ten McIsaac children. By 1860, all the ships from Nova Scotia had arrived. The Gaelic community at Waipū thrived and Norman McLeod continued to inspire a doglike devotion but many of his flock scattered to the timber and gold mining camps, the McIsaac’s and Flora among them. In 1867, when Flora was 93, the Thames goldfield was officially opened and the McIsaac’s established themselves at Tapu Creek with mining claims and in later years were referred to as a family ‘of Thames celebrity.’
In January, 1874, Flora died, aged 100, having retained her faculties until the last. Unusually, despite living amongst the English for so long, she could not speak or understand the language and only ever spoke in Gaelic. Although a staunch supporter of her church, the priests who were asked to come a few miles from Grahamstown to bury Flora refused, and she was interred with one short prayer being read by a mourner.
Two years before Flora’s death one of her charges, Catherine McIsaac, had died aged 18. The same year Catherine’s sister, Ann Gillies, named a daughter after her. Tragically this Catherine died in 1881 aged nine. All are buried at Shortland cemetery.

Friday night openings back at RSA