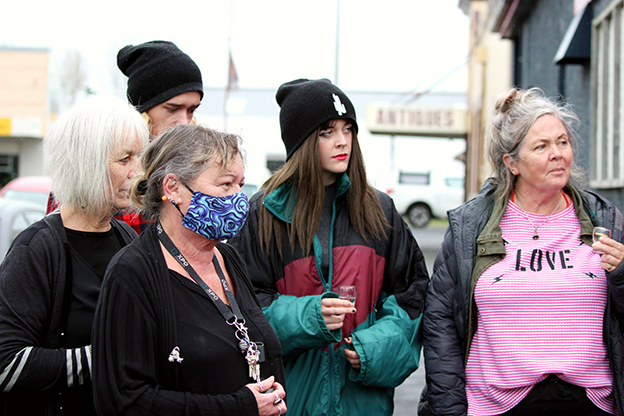 Pizza and Greek liquor was handed out to mourners at the 10-year commemoration of Jordan’s muder in Paeroa.

A gentle smattering of rain dripped on to a pizza with a cranberry sauce swirl, and into colourful shot glasses filled with Greek liquor.
It dripped on to the flower bed behind Arkwrights Antiques, where pink petals poked out from under red shrubbery.
As the shot glasses of ouzo were raised 10 years to the day since Jordan Voudouris was murdered in Paeroa, rain dripped on the heads of mourners of the town’s beloved “pizza man”.
“As we stand here on this pretty overcast day, it reminds us in life there are things that are a bit miserable, and that we’d rather not have in our lives but they’re a part of our lives,” Paeroa Bible Chapel pastor Bill Tissingh said at the memorial on Saturday.
“When a death comes, a tragic death, one of the things we need is a sense of closure, and it’s really hard for family and friends to get closure when there is no closure to it.”
Ten years ago, in the early hours of June 18, 2012, popular Paeroa resident Jordan Voudouris was fatally shot outside the back of his Belmont Rd business, Mykonos’ Pizza and Pasta Restaurant.
According to a NZ Police report from 2020, there were more than 10,000 documents in the case file; however, no one has been held accountable for the murder of the restauranteur, killed a week before his 56th birthday.
The Saturday commemoration, held at the memorial plaque off Hall St, close to where Jordan was murdered, was organised by Ryan Wolf, who launched the podcast Guilt: Who Killed Jordan Voudouris? in 2021, with the goal of revisiting every aspect of the homicide case.
The final episode was released the morning of the 10th anniversary of Jordan’s death.
“We’re going to have a shot of ouzo,” he said.
“The last memory [Jordan’s brothers] have of him, was having a shot of ouzo at Nikos Pizza Bar in Auckland.”
Mr Tissingh, who officiated at Jordan’s memorial in 2012, remembered him as being “vivacious”.
He said the connections people made in Paeroa were long-standing.
“Small communities like Paeroa, we hold on to that, and that’s part of our strength and value as a community,” he said.
In 2020, police revealed a .22 firearm was used to kill Jordan at close range.
Finding the firearm that killed Jordan had always been the key to solving his murder, police said.
The podcast Guilt can be found on Apple Podcasts and Spotify.