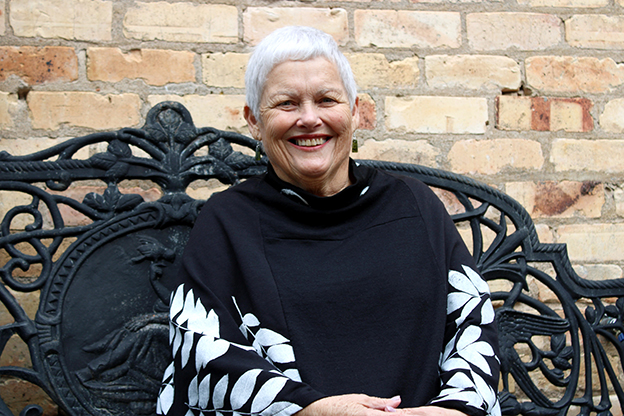 After 33 years in politics, Sally Christie will not stand again for council this year. Photo: KELLEY TANTAU

Too scared to stand in front of bulldozers, Sally Christie helped oppose mining at Waiomu along the Thames Coast the best way she knew how: by standing for the local community board.
That was back in 1989. Sally was 37-years-old with a six-month-old daughter.
Due to public and political opposition, the mine was never developed, and no extractive industries in the Thames Coast remains one of Sally’s proudest achievements in her 33 years in politics.
She has chosen not to stand again as a Thames-Coromandel district councillor at this year’s local body elections.
Sally, who moved to Thames in 1984, completed a total of 11 election cycles with the district council and the Waikato DHB.
“Even though they’re totally different institutions, the focus was still about people and connection,” she told The Profile. “I never felt as if it was a huge difference, even though the health system rightfully focuses a lot on when we’re not well, and local government focuses on keeping us well.”
Sally originally trained as a nurse and spent some time working in England. She used to do her first ward round in her jeans at 6 o’clock in the morning, and said she’d find out “a whole lot more” about people than when she had her uniform on.
She spent around 12 years on the Waikato DHB before its members were replaced by a commissioner in 2019.
For the 2016-2019 term, Sally was the sole female councillor on Thames-Coromandel District Council. She was joined by Robyn Sinclair in 2019.
“If I was going to say anything moving on, it would be that both us at council, and the community at large, need to get a lot better at having hard conversations about hard things without diving for the four corners really quickly,” she said. “We have to find common ground.”
She said not everything was black and white.
“It’s uncomfortable, but we all have to live in the grey a bit more.”
Sally will now turn her attention to her role as coordinator with the Hauraki Family Violence Intervention Network. It’s a role that combines her passions for people, health, and the community.
“It feels like a really neat opportunity for me,” she said. “I’ll go from one thing to another, but to have only one kaupapa and to have a clear focus, I think will be energising and healthy for me.”
She said local government was “not for the faint-hearted”, but those with political aspirations needed to “be brave; ask the questions; don’t assume things”.
“You never know who lives in these hills – I think amazing people do, and [local government] has to be made accessible so that people feel it’s a possibility for them.”
Sally said there was a lot of change incoming, including local government reforms, and Three Waters, and likened the ride to being in white water.
“But you’re not in an individual canoe,” she said, “you’re in a waka, but you do have to know how to paddle on your own.”