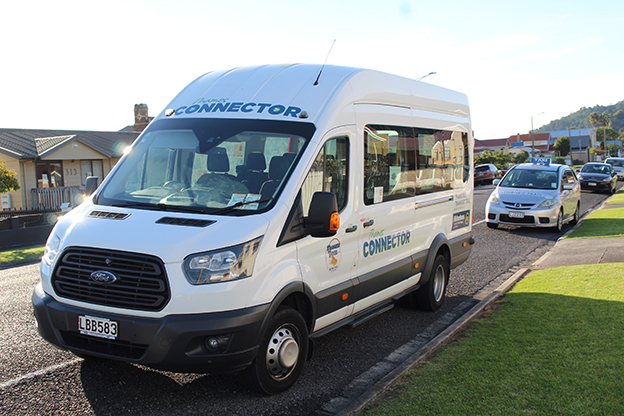 The buses are expected to be the same size as the existing Thames Connector bus, and fares may cost as little as $5, and seniors with a SuperGold Card may travel for free. Photo: GORDON PREECE

Proposed new bus services for Hauraki and Coromandel are at a standstill after Waikato Regional Council was unable to secure government funding.
At a meeting last week, councillors heard Waka Kotahi New Zealand Transport Agency wasn’t in a position to fund additional bus services for Thames-Coromandel and Hauraki districts because it had already allocated its funding for public transport.
Council subsequently made the decision to hold the project until funding was secured, because community feedback showed support for the project only if Waka Kotahi funding was received.
In April, council encouraged the community to have their say on its proposed new bus services for Thames-Coromandel and Hauraki districts.
Council received 155 submissions, with 64 per cent in favour of the bus service if council secured Waka Kotahi funding for 51 per cent of the cost of the service.
Only 24 per cent of submitters were in favour of new bus services without funding from Waka Kotahi or other sources.
If funding had been secured, council would need to collect an additional $163,400 of rates revenue through targeted rates to Thames-Coromandel and Hauraki residents in 2022-2023 for the bus service. Without Waka Kotahi funding, council would need to collect $333,500 through targeted rates.
Thames-Coromandel councillor Denis Tegg said it was disappointing Waka Kotahi couldn’t provide funding for the bus service.
“While it’s disappointing to see that funding has not been immediately forthcoming from Waka Kotahi to deliver services that clearly have such widespread community support, it’s really encouraging that council has heard and followed community sentiment on each of the proposals,” he said.
Council said it planned to continue public consultation and more detailed planning of bus routes and timetables.
“It’s… great to see the door remains open to those new services, should the funding picture change,” Cr Tegg said.
“We will be strongly advocating for Waka Kotahi to take account of the strong expression of public support for new services that this consultation process has demonstrated.
“By carrying out detailed forward planning now, the council is strategically placing itself in the best position to obtain new funding when this becomes available.”
An earlier council report showed possible routes for the proposed bus service included a return service every two-hours from Waihī to Paeroa and morning and afternoon services between Thames and Te Aroha, with connections to Hamilton. It could also include connections for commuters from Ngātea and Paeroa into Thames, and connections from Thames to Coromandel, Whitianga, Tairua and Whangamatā.
The buses are expected to be the same size as the existing Thames Connector bus, and fares may cost as little as $5, and seniors with a SuperGold Card may travel for free.
Along with council’s proposal for new bus services, they also encouraged the community to have their say on whether council took over rating responsibility from district councils for public transport services in Thames-Coromandel, Hauraki and Matamata-Piako districts.
Of those who responded, 79 per cent of submitters agreed council should take over rating responsibility and council voted eight against five at the May 23 meeting to do so.
Mr Tegg said the rating decision would allow much better integration of new public transport services across district council boundaries.
“It is much more efficient to have the regional council both rate for and provide the services,” he said.