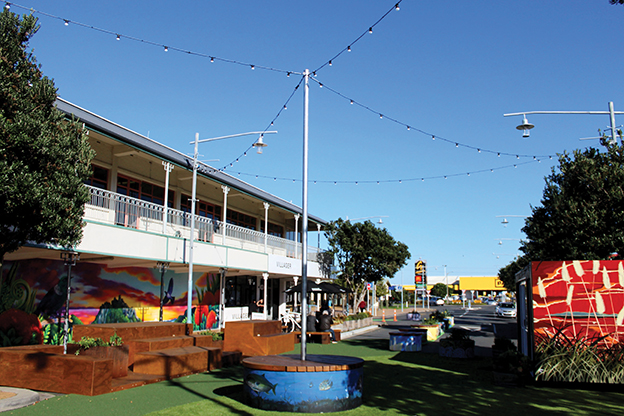 Community board members have voted to go out to public consultation for the Vibe. File photo: KELLEY TANTAU

Despite three in-person pleas and a petition signed by more than 600 to remove the “temporary” Vibe in Thames, the community board chose to keep it for another year and invest up to $15,000.
The Thames Community Board meeting on June 22 began with members of the public calling for decision makers to remove the “eyesore” that has closed Mary St to traffic for 15 months.
They argued there was inadequate consultation prior to the initial street closure; that in more than one year, neither the council and community board had formally approved the design; and that the Vibe space was “ugly beyond belief”.
Sheryl McConnell, who presented a petition to the community board signed by more than 640 people in April, asked members to “please listen”.
Her petition was followed by one in favour of The Vibe that amassed 100 signatures.
During the hour-long discussion about the space, two community board members poked holes in the public petitions, with one alleging people only signed against the space because they thought it was a Covid-19 register.
“We’ve had two petitions, and if we’re brutally honest – and I think we should be – both petitions had flaws,” Thames ward councillor and board member Robyn Sinclair said.
“When I counted all the names, I saw that some people had signed the initial petition more than once… the other thing I’m aware of is that I know at least three people who signed the petition because they sort of felt the pressure to.”
Cr Sinclair believed the vast majority of people who had an opinion about the Vibe didn’t have an adequate opportunity to share their opinion, and called on council to create its own consultation.
Member Cherie Staples also questioned the validity of the petitions.
“Six-hundred people versus 100 in a petition, when we’ve got about 6000-7000 people living here… I too understand there is the question around the validity of the signatures of those who are against Create the Vibe,” she said.
“Particularly, I know of one business who had it on their front counter and people were signing it because they thought it was the Covid register.”
After lengthy discussion, members voted to retain the Create the Vibe trial as current for 12 months, replacing some materials as required at a cost of up to $15,000.
Staff must report back by June 30 with its final recommendation, following a community consultation that would likely take place over the summer (January-March) period.
Board chair Strat Peters and member Peter Revell voted against the motion.
Speaking to The Profile immediately following the decision, Carson’s Bookshop owner Greg Hampton said the discussion was “very muddled” and ignored the financial and logistical aspects of Mary St’s closure, raised by the public.
“I don’t think the petitioners have had any response from council since first lodging it.
“They spoke at the meeting again today and still there doesn’t appear to be any message back,” he said. “So, there’s still no solution proposed for the roundabout which can’t be accessed from town. It’s completely ignored in the whole discussion and decision-making.”