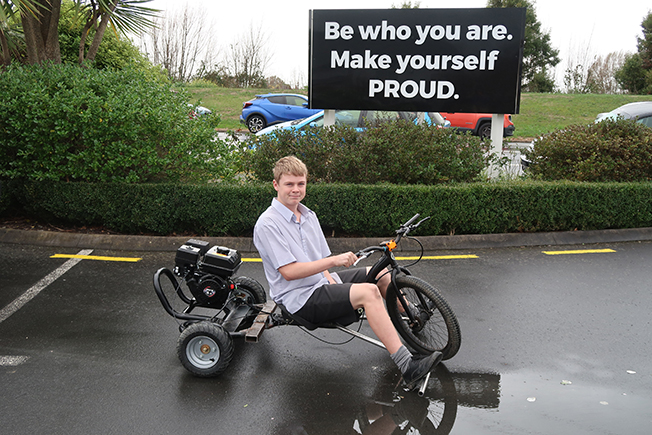 A Hauraki Plains College student has put pedal to the metal by creating a motorised trike as part of his school’s engineering class.
Ryan Denize, 16, started the Year 12 class at the beginning of the year, and was tasked with making “a wheeled device powered by either an electric or petrol motor”.
“There were many ideas such as go-karts, motorised chilly bins, and even little motorbikes and scooters,” he said. “Once we chose what we wanted to make, we had to plan the project.”
Ryan spent around one month researching and finding inspiration for his build. He then had to draw his plans and blueprints.
“The plans included the type of material, the dimensions, and sizes. Once we had the plans checked off, we went into the workshop and began our work.”
Using half of a pedal trike and half of an off-road go-kart, Ryan welded, bent, shaped, cut, and heated metal to make the middle of his trike. The whole process took about seven to eight weeks.
“Once finished, I put the motor on and tested it out in the school car park,” he said.
“The most challenging part [was] planning out what to do because I’m not a great drawer and it was hard to design my project without holding [it] in my hand and mocking up pieces.
“I did the Year 11 engineering class last year, which was where I had my first experience welding. I have also been around cars and automotive projects all my life.”
Ryan said it cost him around $500 to make the trike.
He was now sanding it down to make it ready for painting.