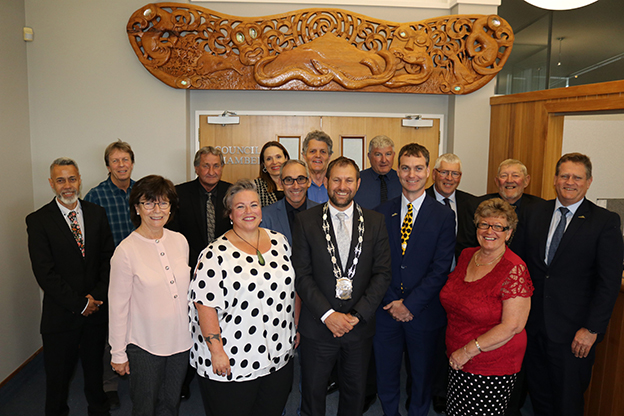 Six Hauraki district councillors have chosen to stand again in this year’s local body elections, while others’ personal circumstances have made the decision a difficult one to make.
As part of ongoing election coverage, The Profile contacted the 13 elected members of Hauraki District Council, asking them of their campaign intentions ahead of voting day on October 8.
Two councillors did not respond, and one chose not to comment.
Plains ward councillor Rodney Garrett passed away on June 6 after a battle with cancer. He was thanked for his service by council in April.
Jo Tilsley gained 1356 votes in 2019 ahead of her first term as a councillor for the Paeroa ward. Until 2021, Jo was Positive Paeroa’s town promoter.
She said it wasn’t an easy decision, but she wouldn’t be standing again this year.
“My personal circumstances have changed, making it difficult to give the time the role deserves,” she said.
Rino Wilkinson was elected as the Hauraki district’s first Māori councillor in 2019. He was the third-highest polling candidate for the Paeroa ward, with 1368 votes.
He is re-standing as councillor for the ward this year.
“I have enjoyed my first term experience; I have great admiration for everyone involved throughout the entire HDC on all levels. The respect I have for all is overwhelming,” he said.
“I’ve always stood by what I believe in – you’re always learning… After creating history as the first elected Māori, I want to walk proud and represent all.”
Ray Broad gained the most votes of the Plains candidates, 1290, back in 2019.
He is a first-term councillor and will be re-standing this October.
“This first term representing the Hauraki Plains Ward, has demonstrated there is a lot to be achieved… Our ward is unique, with more than six towns to represent. Each town and the ward has a number of projects to be completed and issues that need to be addressed, and if re-elected, [I] would work together with the other ward councillors to ensure these are achieved and resolved,” he said.
With 1611 votes, Paul Milner was the highest-polling candidate for the Paeroa ward in 2019. He was appointed deputy mayor and has been the chair of council’s District Licensing Committee and Hearings and Judicial Committee.
He will be standing again.
“The reason for standing is pretty simple.
“I really enjoy being able to do my bit in making our community a great place, and we have a wonderful team of elected members and staff so it is a pleasure to work with them.”

Toby Adams, who became Hauraki District Council’s third mayor after securing 5036 votes at the 2019 election, is standing for the top job for a second term.
“My decision was based on the passion and drive I have for my community, and with the raft of changes from central government, providing a strong voice for our community is important,” he said.
“The current councillors have been absolutely awesome to work with and [I] would look forward to working with them again if they are also successful, and whoever decides to join the council.”
Waihī was the most contested of the Hauraki wards in 2019. Anne Marie Spicer was the highest-polling candidate with 1893 votes. For the 2019-2022 term, she has been the Waihī ward chair and has decided to stand again.
“The two terms I’ve served have certainly had challenges, given the proposed changes and reforms to local government and other challenges here in Hauraki and New Zealand. But I’ve enjoyed working with council on some good projects… and it’s been an honour and a pleasure to serve a second term. I still feel I have much more to give and do, not just in Waihī but in the district, so I hope I’m voted back for a third term.”
Phillip Buckthought received 1139 votes in 2019, securing his place on council for a second term. For the past three years, he has been the chair of the Emergency Management Committee. He hasn’t yet made a decision on putting his hat back in the ring.
“Initially I wasn’t going to stand but decided I needed to step back and take some time to think about things a bit,” he said. “At this point, I am undecided.”
Carole Daley stood for a second term in 2019 and received 1430 votes to her name. This term, she has been chair of the Paeroa ward and the Community Housing Working Party. The week before being contacted by The Profile, she made the decision to put her name forward for a third time. “I have made my decision based on the support I have been given to do that once more,” she said.
First-term councillor Paul Anderson received 1754 votes back in 2019. A businessman for more than 25 years, Paul established Diamonds on Seddon in Waihī’s main street close to two decades ago. He was still undecided on whether or not to re-stand.
“I need to weigh up the time the role takes and the toll it takes on my business and family,” he said.
After six years and two terms, Ross Harris told The Profile in April he will not stand again for Hauraki District Council.
His absence means for the first time in more than a decade, there will be no ‘Harris’ around the council table.
Duncan Smeaton, representing the Waihī ward, did not wish to commit on his intentions “at this point”, and responses were not received from either Brian Gentil or Sara Howell, who also represent Waihī.
DETAILS: Local government election nominations open July 15, more info online at: vote.nz.

‘The job’s not finished’