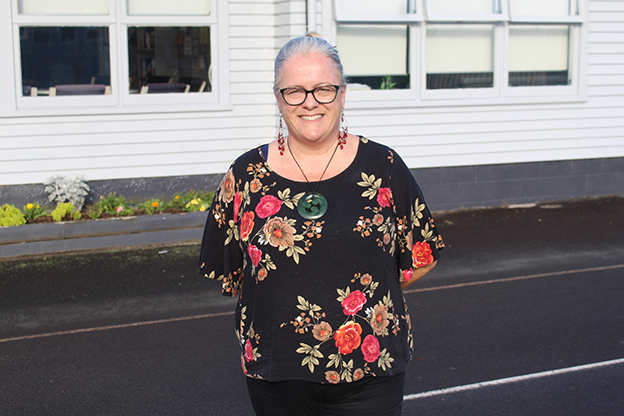 A fond memory of Paeroa drew Deborah Eastham to take on her new challenge as principal of Miller Avenue School.
Deborah, or whaea Debs, told The Profile after 18 years as Papatoetoe West School’s deputy principal, she thought she’d like to take the next step as a principal.
She was contacted about Miller Avenue School’s upcoming principal vacancy and met with former principal Richard Wilkinson, who departed in April to take on a leadership role at Kaitaia Abundant Life School.
“[Richard] said to me when we met, before I even applied, ‘I think you’ll be a great fit here, you’ll love it and the kids are great’,” she said.
“I had a look around the school and I just had a really strong feeling of, I think this could fit me, this place.”
Deborah said Richard asked her if she had any knowledge of Paeroa and she told him of a fond memory she had of the town. “A very long time ago, a group of us from teachers’ college cycled all through the Coromandel area. We cycled through the Karangahake Gorge and it was pouring with rain, and we arrived into Paeroa,” she said.
“We went to a local dairy and one of our group was very slight and she was shaking and wet, and the lady who owned the dairy said ‘come on in, I’ll make you a hot cup of tea and here’s some towels’.
“We were blown away as Aucklanders, we thought that was amazing, so that’s the strongest memory I have… I was like if that’s what represents the area then I’d love to be part of that area.
“So it’s not the L&P bottle or any of the other things…it was that community feel and that’s what drew me here in the first place.”
Deborah said she felt “very excited” in her new role in a school with 500 fewer students.
“I love the idea of a smaller school where I know every single child and can build something with the local community, that’s what I’m really excited about,” she said.
“It’s all about the kids… how can we make sure they feel strong as learners and ready to go out there in this strange world we’ve been living in with all these uncertainties – that’s my number one goal.”
Deborah said she also wanted to build strength in the school’s Māori kids so they could “succeed as Māori”.
A pōwhiri (welcoming ceremony) was held for Deborah on June 7. Her husband Rick, teenage daughters Charlotte and Madelline, and Papatoetoe West School students and staff were among those who attended.