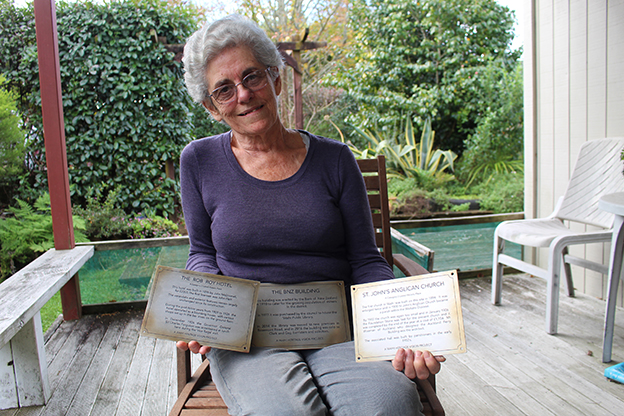 Robyn Ramsey with the new plaques soon to be installed on three of Waihī’s historic buildings. Photo: GORDON PREECE

Three historic Waihī buildings will soon be adorned with plaques as part of a Waihī Heritage Vision initiative.
Member Robyn Ramsey told The Profile the informative plaques will be placed on historic buildings in Seddon St in the coming weeks, so people could discover the town’s history.
A plaque was installed at the old BNZ building on May 26, and plaques will go up at St John’s Anglican Church and the Rob Roy Hotel in the coming weeks.
“There’s only room for a little bit of information on the plaque… but we’re hoping when we’ve got a few done we can make a heritage trail,” Robyn said.
“A brochure that will have extra information and perhaps a few photos of how they looked in the old days.”
Robyn said the initiative came from Waihī Heritage Vision chairman Warwick Buckman and his wife, Krishna, after they visited Australia and enjoyed viewing plaques on the buildings of a small town.
“We actually started with the old BNZ building in town… we had a plaque made for that one [in October, 2020],” Robyn said.
“That was a start and it was done by a local man, he was a friend of one of the members but he was sort of in and out of Waihī and took a while to get a plaque made.
“But now that they’ve started it up again we’ve changed the design, so we’ve got a replacement one for that one so they’ll all be the same.”
Robyn said the plaques, which were made in Tauranga, cost $236 each and were partly paid for by a $1000 donation to Waihī Heritage Vision.
“There’s a portrait on a wall of a woman [in Martha Court], Ada Donaldson and she was awarded an MBE at the end of World War I… we’ve had a plaque made for,” she said.
“The great granddaughter paid for that plaque and then she gave us a generous donation [$1000] as well to Waihī Heritage Vision, so we’re using that extra money to pay for some of the plaques.”
Robyn said they have a list of around 40 more potential buildings they could put new plaques on, including Goldfields Railway, and will be seeking funding for them.
“Some of the owners of the buildings so far that we’ve spoken to have said they’ll pay for the plaques, so that’s good,” she said.
“There’s a couple of trusts, I think our chairman’s going to make applications to get funding.”