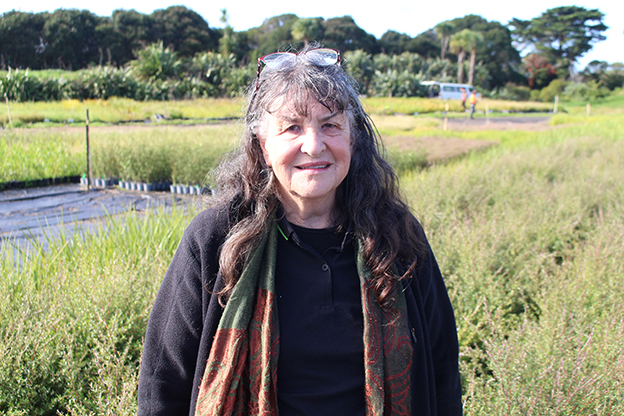 A desire to continue her late daughter’s legacy and address issues facing youth, the unemployed and people at risk led Adrienne Dalton to establish Te Whangai Trust in Pūkorokoro/Miranda.
The trust, which she established with her husband Gary in 2007, provides an alternative route for those at risk or on a benefit to develop their skills, work ethic and ability to contribute to the community through environmental projects.
Adrienne, who was made a Member of the New Zealand Order of Merit (MNZM) for services to conservation and youth in the recent Queen’s Birthday and Platinum Jubilee honours, told The Profile, the idea for the trust was inspired by her daughter Leigh, who died in a car accident in 2007.
“She was the sort of kid who brought home stray people instead of stray animals,” she said.
“She talked about doing something like this [the trust]… we looked at her legacy and we looked at how we could set up a community-based organisation that focused on people’s needs.
“But it had to be hand up not hand out, and had to cover social, environmental, economic and cultural outcomes.
“We took her business model, which was a native plant nursery.”
Adrienne said she also noticed a need for alternative services for youth, the unemployed and people at risk during her early years working in justice and education.
“We had a sector of our community that were beneficiaries and they were locked in a dependency cycle and their kids were also missing out on education because of their family circumstances,” she said.
“The government services weren’t reaching our kids, or there was a conflict between those services.
“I’d go to court with the kids or the person concerned and advocate for them to show the judiciary that there was a conflict in the system. They weren’t aware of the circumstances of each individual… and people would just give up and say ‘I may as well go back to prison’, and then you had that compounding issue and recidivist offending.”
Adrienne said after discussing the idea for the trust with local iwi, a local kuia gifted them the name Te Whangai, which means to nurture people as your own.
“We went and took out a mortgage on the [family] farm and started the trust with 100 per cent debt,” she said.
“We looked at the model, and it had to be collaborative because it couldn’t rely on government for funding. Whoever arrived and wanted support, we looked at their skill set and said ‘okay, this is what we have to achieve as a group, how we’re going to do it?’ and from then the nursery grew.
“We had this hairy audacious goal that we generate at least 60 per cent of our own income and we’re now generating 80 per cent and employing 74 people in the communities in need.”
Adrienne said the trust had also expanded into Auckland with hubs in Pukekohe and Mt Roskill, and was establishing hubs in Panmure and Huntly.
“We’re looking at how each of our community hubs create a village where you provide pastoral care for people,” she said.
“As a human being they have worth and you just have to grow them so that worth can be developed, and then they can contribute to the community and the community starts to respect them.
“Unless the community starts to respect what they can do, and what they can contribute, our gangs are going to get bigger, [and there will be] more violence and social unrest because we’re alienating and isolating so many people.”
Adrienne said her honour was acknowledgement of all her supporters, including philanthropic groups, corporates and the trust’s senior management team.
“It’s the Te Whangai people who actually create the legacy, and through their mahi they actually help create the mahi for someone else to follow in their footsteps and give another family the opportunity to grow themselves,” she said.
“They can take their kids and grandkids back and say: ‘see that forest there? I planted that’.”
Adrienne said she also felt a “tinge of sadness” that her husband Gary wasn’t also honoured.
“I feel very guilty being given [MNZM] when it should be a joint one, because it’s very much a partnership,” she said.
“We’ve been married 52 years and built on each other’s strengths and weaknesses, [and] whatever we’ve done we’ve worked together… so to me his contribution was equal to mine.”