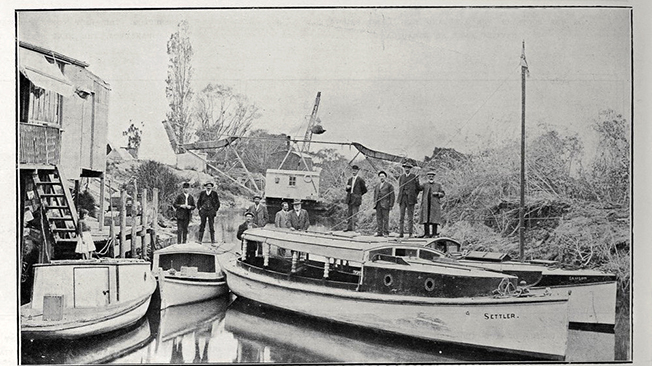 A busy river scene at Kerepēhi showing launches and a Priestman dredge engaged in the drainage of the Hauraki Plains. Photo: SUPPLIED

With his wife and children coming from Scotland to join him at Kerepēhi, Robert McCollum was taking a cautious approach to life.
The 33 year old felt uneasy having been left in charge of towing a dredge to Waitakaruru with the steam launch Albany without anything to use as an anchor.
The launch Hauraki left with the chief engineer of drainage work and the dredge engineer on board but Robert fastened the dredge to a bank and returned in the Albany to Kerepēhi for some heavy iron.
It was 1909 and Kerepēhi was the headquarters of Lands and Survey’s big swamp reclamation project. As well as swamp draining, launches, punts and dinghies were built at the slipway, where major repairs were also carried out. A large labour force was needed for the work, which was described as “a courageous and prolonged struggle with the elements”.
After finding some iron to use as an anchor, the Albany returned down river. When within sight of the dredge, Robert went to blow the whistle to let the dredge man know they were coming. Inexplicably Robert fell overboard. The Albany’s engineer Frank Biddle immediately reversed the engine and stopped the launch as quickly as he could.
He called out to Captain Leslie that a man was overboard but the captain became very agitated and abandoned the wheel. Biddle had to take charge and attempted to work the boat to where he could see Robert in the water. The launch was too far off to throw a line and there was nothing but heavy rope on board. Robert disappeared under the water. He could not swim and the river being very rough, there was little hope of finding him. Further police searches with grappling hooks were unsuccessful.
Nearly two weeks later Robert’s body was found in the river by Mr Kirby near Opani Point. He secured it until another launch was available to take it to the Thames morgue.
At the inquest Captain Leslie was very reluctant to give evidence and even indicated he could not speak English. Frank Biddle said Robert had been quite sober.
There was one buoy on the Albany but he had not been aware of it. He believed Robert had overbalanced himself while trying to pull the whistle.
The handle of the whistle was stiff and Robert may have slipped.
The jury returned a verdict that Robert was accidentally drowned but there was no evidence as to how he got into the river.
Frank Biddle was commended for the straightforward manner in which he had given his evidence but there was a stinging rebuke for both him and Captain Leslie – they were considered unfit to occupy the positions they held.
Robert was buried at Shortland cemetery. It is unknown when his wife and children arrived or if they had even left Scotland; one newspaper report says they were “expected to arrive shortly”, another that Robert had “just sent money home to bring his wife and two children from Scotland.”