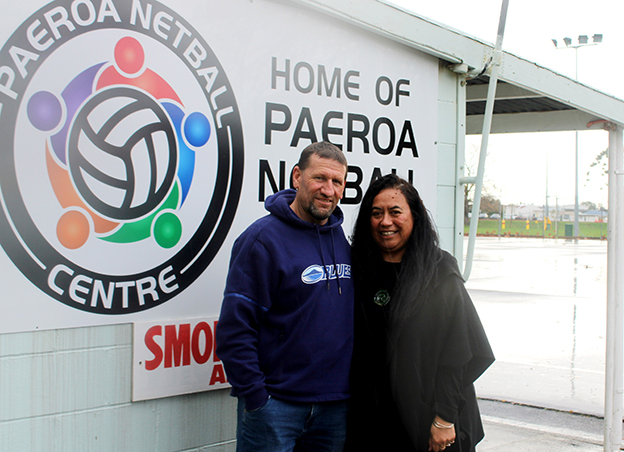 Steve and Josey McKain have resigned from their posts at Paeroa Netball Centre after being involved for more than two decades. Photo: KELLEY TANTAU

After more than 25 years involved with the Paeroa Netball Centre, it literally took losing the ability to walk to keep Josey McKain off the courts.
After suffering an array of health setbacks, from breaking her tibia and fibula bones in her lower leg, to contracting Covid-19 and having a heart attack, all within six months, Josey and her husband Steve decided to take a step back from their roles at the centre, where Josey was president.
“I think this was telling me something,” she told The Profile, alluding to the broken leg doctors said could take 18 months to completely heal.
“When I think about it, so many people have told me to slow down. I never thought I was doing it fast but this has definitely slowed me down.”
Josey used to play, coach, and umpire netball, and in the time she’s spent involved with the centre, she’s estimated they’ve fundraised, or have been granted funding of at least $200,000 to install fences, lights, and shelters.
“I was only young when I took over, and the only reason I did was [because] my aunty told me to come along and coach her daughter’s team. I was the primary co-ordinator, slowly went to vice president, and then to president,” she said.
“I’ve been there ever since.”
Steve has also helped with maintenance at the centre, as well as in its canteen.
“If I wanted to spend time with my wife, I had to go to the netball centre,” he said. “That’s how much time she spent there when she took over.”
In September, Josey was in Hamilton when she broke her tibia and fibula bones during a fall. In March, she caught Covid-19 and subsequently suffered a heart attack.
She is still getting around with the use of crutches and a walker.
“I’m getting used to rods and pins and pain, but it’s the way it is,” she said.
She officially resigned as president from the centre in early April, while Steve resigned from his post with Thames Valley Touch. The couple will still be involved with the Paeroa Basketball Association.
“We’re the type of people that if you can’t do your job properly, then don’t do it,” he said.
They were also acknowledged with life memberships at the Paeroa Netball Centre alongside three others, including Meirene Gillett, Kereana Parata, and Ruth Aitken, who was recently named a Dame.
“These are the first [life memberships] I’ve known of since I’ve been involved,” Josey said. “Before I thought about resigning, I knew of people stepping down so I thought we needed to acknowledge them, because you have people who have been involved for a while who get left behind and forgotten about that need to be thanked.
“All of a sudden, we were getting our life membership, too.”
Josey and Steve said sporting clubs would always face the challenge of maintaining membership numbers, but they looked forward to seeing the continuing progress of the Paeroa Netball Centre.
“Change is good,” Steve said, “but so is history.”