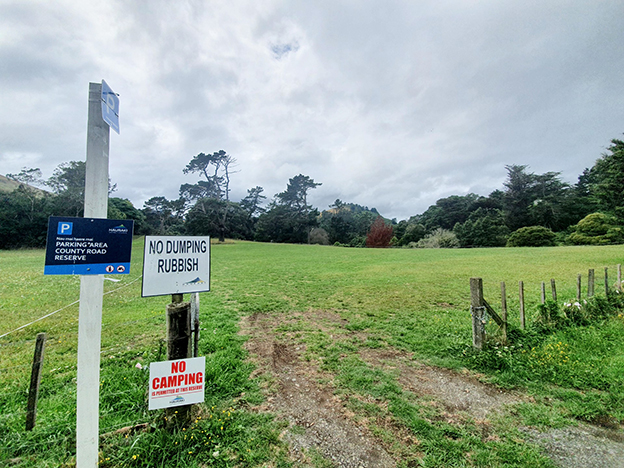 Cornes Paddock in the Karangahake Gorge will be turned into a permanent car park to accommodate visitors to the area. Photo: KELLEY TANTAU

It wasn’t an “easy decision”, but Hauraki district councillors have stuck to their guns on their commitment to create a new car park in the Karangahake Gorge.
Elected members unanimously made a decision back in November, 2021, to develop the gorge in a staggered approach, which included creating a car park off County Rd into Cornes Paddock.
This was to alleviate safety concerns on the state highway that has seen 68 crashes occur in the past five years.
But residents who neighbour the chosen site, on the corner of Crown Hill Rd and County Rd, came up against councillors on numerous occasions, continuously calling for the project to be scrapped, or put in another location.
At its meeting on June 29, “it was time” for councillors to choose: listen to what council said was a “minority” of those against the project, or continue on as planned.
“This issue has been before the council for eight years with no permanent decision on it… this is the time to make the decision. We are either going to do it or we’re not,” Paeroa ward chair Carole Daley said.
“For this council, over the eight years, could we calculate how much money has been spent on indecision, looking at things again, all the plans that have been done, the staff time… can we count that money? No, we probably can’t and we cannot continue to do it.”
Hauraki Mayor Toby Adams said it was his decision to open Cornes Paddock for parking about 18 months ago, after being “inundated” with requests from the public to alleviate the “safety hazards” surrounding the state highway.
“I made the call as mayor to open the paddock… and I don’t apologise for opening it. It is a real safety issue and I’m not having somebody die on the road there because we didn’t open the gate.”
A report was presented to council to consider whether Mackaytown Reserve could be used as an alternative car park for the Cornes Paddock car park; however, staff concluded that the 100kmh speed zone surrounding Mackaytown, as well as its poor access to the Hauraki Rail Trail meant the option wasn’t viable.
All councillors, except Plains ward councillor Ray Broad, and Waihī ward councillor Brian Gentil, voted to proceed with council’s plans to install a metal car park, a perimeter fence, and planting at Cornes Paddock, to be opened seven days a week.
Cr Gentil said he would “stick with the ratepayers” and vote against the project.
Eva Mayor, a spokesperson for the Karangahake residents, told The Profile immediately after the decision that she was “disappointed”, but had prepared the community for the outcome.
“I do understand what Carole Daley said about the work, time, and effort put in, not only on the council’s part, but on our part as well.
“We have done so many submissions, been to so many meetings, so it is good it has come to a close around making a decision. It’s not the option that we wanted,” she said, “but it is what it is.”