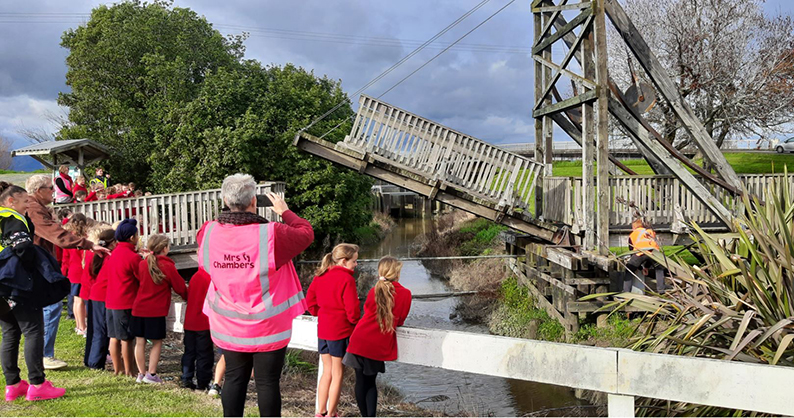 For the first time in roughly seven years, the half-scale, working model of the old Piako River Bridge was raised.
The Millennium Bridge, which was constructed in 2002 at Tilbury Reserve in Ngātea, was lifted after students at Ngātea Primary School learned about its history.
“I have never taken much notice of the bridge and why it’s there,” pupil Jack Moyes said. “It was crazy how it came up, I thought it would come up on both sides. There was a pulley system with metal cables that [wound] the bridge up when you cranked the handle.”
To celebrate the start of the new millennium, the Ngātea community raised funds to create the replica adjacent to the original site.
While they sought to make the pedestrian bridge as exact as possible, some new materials, such as stainless steel nuts and bolts, had to be used to make it safe.
The replica of the centre span is 6m long by 1.8m wide, while the tower is 6m high from the deck.
According to Hauraki District Council, the original Piako River Bridge opened in 1917, when all transport and access to and from the land was by sea, river, or canal.
With the gradual development of the first roads, it was essential that a crossing be made over the Piako River, and the new thoroughfare quickly became the main route between Auckland and Tauranga.
In contrast to the more commonly used swivel system, the central span of the Piako River Bridge was lifted up when larger boats needed to travel up the river. As the roads improved, the need for river transport slowed, and in 1952, the bridge lifting mechanism was removed and the central span fixed in place.
In 1963, after 46 years of service, the bridge was demolished and replaced by the present structure.