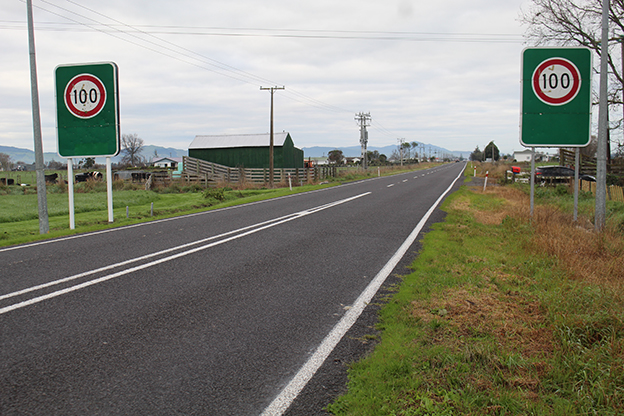 Hauraki Rd, which runs through Turua, will have its speed limit reduced to 80kmh. Photo: GORDON PREECE

A Hauraki Rd resident who feared the day a car would come crashing through her home has had her worries eased by the district council.
Glenice Te Rore spoke to Hauraki District Councillors last week during hearings of its speed management plans.
She agreed with council’s decision to reduce speed limits of some of its rural roads to 80kmh, including the length of Hauraki Rd, which runs between State Highway 25 and State Highway 2 via Turua.
According to council, that 14km stretch has the highest number of crashes for any road in the Hauraki district, with 67 crashes in the past 10 years, and seven people either killed or seriously injured.
Glenice told councillors that in the seven years she has lived on a Hauraki Rd intersection, she has witnessed two serious accidents that resulted in cars crashing through her fence and into her yard.
“One of the accidents, a lady passed away.
“From what I’ve heard, she made a small error but because of the fast speed of the other vehicles, the result was huge,” she said.
“I do have fear that vehicles will come into my house – hit my dwelling – and the front rooms are bedrooms.”
In her submission, Glenice said she had considered building a concrete fence to protect her home; however, the best improvement for the road was for it to be widened, with a turning bay installed.
She also said steel barriers along the side of the road would help mitigate serious crashes.
“But the easiest way to prevent other vehicles coming into the yards of houses is for the speed limits to be reduced,” she said.
Other submitters didn’t think Hauraki Rd needed to have its 100kmh speed limit reduced, with one commenter saying he thought it was “one of the better and more safer roads to go 100 on”.
Another said decreasing the speed limit would “add cost to travel times” while one more suggested lowering limits would be more dangerous than keeping the status quo.
Plains ward councillor Ray Broad suggested a compromise of sorts: reducing the speed limit of Hauraki Rd to 90kmh.
This was supported by Waihī councillors Sara Howell and Brian Gentil; however, the amendment failed to gain traction with other elected members and it was voted to reduce Hauraki Rd to 80kmh to the north and south of Turua township, where the speed will remain 50kmh.
Awaiti Rd, just outside of Paeroa, was also reduced to 80kmh, while the residential zone of Pipiroa Rd in Ngātea was reduced from 70kmh to 50kmh.
Thorn Rd and Waitete Rd North in Waihī had its speed limit reduced by half, from 100kmh to 50kmh, after concerns were raised by submitters.
Once the speed management plan has been updated and approved by council – expected at the end of the month – it will be uploaded into the National Speed Limit Register and council will provide a timeline for inception.

Two years in SPCA for Sam the Kelpie