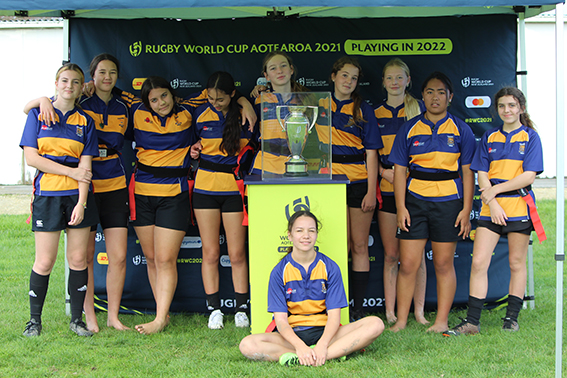 The Trophy Tour made two stops in the Hauraki with hundreds of young players turning out for the events. File Photo: GORDON PREECE

Despite the Black Fern’s absence from their Trophy Tour to two Hauraki towns last month, work continues to be done in the Valley to encourage girls into sport.
The Women’s Rugby World Cup Trophy Tour was promoted as providing an opportunity for the public to get “up close with the silverware” and “meet some of their women’s rugby heroines”.
The tour came to Paeroa for the primary school rippa rugby day on May 18, and was in Ngatea for the Thames Valley secondary school girls rippa tournament on May 25.
Although the young players – of which there were more than 100 in Paeroa – were not able to “meet women’s rugby stars of the past, present and future”, Thames Valley Rugby Football Union’s rugby development officer Scott Day said the two events were “absolutely fantastic”.
“It gave girls an opportunity to network with girls from other schools, clubs, and towns. It also gave them a safe and fun ‘girls only’ environment to excel and enjoy their rugby experience,” he said.
“Because the girls were enjoying their experience, the parents were as well, which is hugely important for any child’s sporting experience.”
Since its launch in March, there have been more than 40 Trophy Tour activations from as far north as Ahipara and as far south as Stewart Island.
Before the world cup tournament begins on October 8, there will be more than 100 further activations due to take place throughout Aotearoa.
A New Zealand Rugby spokesperson told The Profile the trophy was present at every activation, and where possible, current and former Black Ferns and other influential rugby women attend, too.
However, due to the Black Ferns’ playing and training commitments, it was not always possible for them to attend.
“We are unable to guarantee Black Ferns’ attendance at our Trophy Tour activations, although always endeavour to put on a thoroughly enjoyable experience for those attending,” they said.
“We are proud of the role the Black Ferns play in inspiring tamariki and place significant value on community engagement as their high-performance schedule permits.”
Mr Day said the rugby union continued to work on encouraging young girls into sport.
“The TVRFU believes that it is important for girls to feel encouraged and positive about any opportunities to play rugby.
“Rugby is a game that some girls have never been exposed to, and our goal is to make that trend less common and more of a regular experience that they look forward to,” he said.
“If rugby is not their chosen sport, we would hugely encourage them to grab any sporting experience with both hands.”
The union is hosting a number of specific girls rugby events over the 2022 season in the junior, secondary school, and women spaces.
DETAILS: Head to the Thames Valley Rugby Union Facebook Page for information.

Create the Vibe stays for another year