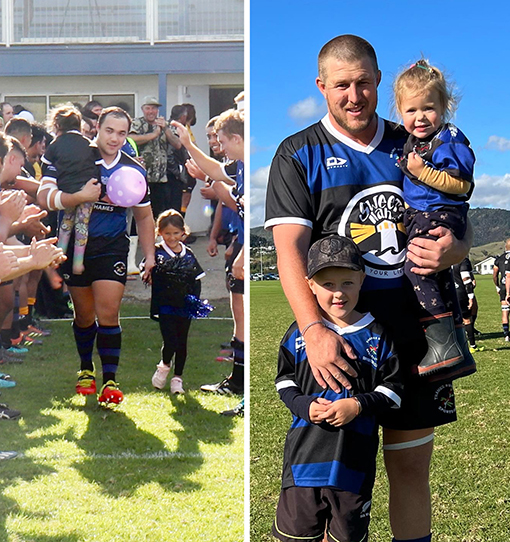 Now they’ve each earned 100 caps, Corbin Saunders and Nigel Williams have their eyes fixed on something else: clinching the McClinchy Cup for Thames.
For three of the past four years, the team in black and blue has made it to the finals, but the cup has eluded them.
They played in heavy rain and high winds last year to lose against Mercury Bay by a mere two points.
But on June 11, the club’s Senior A team faced much the same conditions to beat the Bay, 43-12.
With two games before the semi-finals, Corbin, who has been Thames’ captain for eight years, said winning the cup would be the cherry on top of his 100 caps.
“My grandfather, Jim Darrah, was a bit of a hero, he played for the club, my uncle Ian Handcock played for the club, and my old man [Mark Saunders] played for the club.
“They also won championships, too. I’ve had my shot but I haven’t got one yet, but hopefully this year,” he said.
Corbin, who has played for Thames Rugby for 10 years, said he’s been at the bottom and “almost at the top”, witnessing three McClinchy finals and three tight losses.
But winning the cup this year was “definitely achievable,” he said.
“The 100 games are special to me, but my main goal is to win the McClinchy final this year. We’ve got a really good squad and it’s definitely achievable.”
Corbin’s 100th game was played in Thames on May 28 against Waihou, and his side won 39-12.
A few weeks earlier, on May 7, Nigel Williams played his 100th game in a win against Paeroa. His first game for Thames was back in 2011.
“I was the youngest in the team by about three or four years, but they took me under their wing,” he said.
Nigel started as a second five-eighth, but after playing “about 12” positions for Thames over his 11 years, he now sits in the front row as prop.
His 100 games is an impressive feat after he tore his ACL half-way through his first season with the club. He was out for the next year and had to get knee surgery. After a stint playing in England in 2016, he returned to Thames Rugby in 2017. Both he and Corbin said the rugby club, which celebrated its 150th year with a Covid-19-delayed event in August, 2021, was “family-oriented” with a “cool culture”.
“They’ve been massively supportive,” Nigel said. “You don’t get to play 100 games without being helped along the way.”
Acknowledging the 100-capped players is a new tradition for the club, in which athletes receive a blazer in the clubrooms following their games.

Club president Steve Gooder said they haven’t followed up with century players in the past, but that they would, going forward.
“We’ve probably got 20 past players that have done it, some are close to 200 games, and we’re going to follow up on that and get them recognised as well,” he said.
The Senior As were tipped as the favourites to win the McClinchy Cup this year, but Steve said “you never know” what finals day holds.
“We’ve got to get through, hopefully, four games and win all four,” he said. “We haven’t won it since 2012.”
Steve has been the club’s president for 14 years, and said while there hadn’t been a first XV in Thames for around four years, it was growing, while player numbers remained steady.
There were 130 juniors, 60 senior players, and two teams at Thames High School.
He said like most clubs throughout the country, long family histories were connected to Thames, with Nigel’s father Moe Williams also a past coach, and his brothers, past players.
He said both Corbin and Nigel were good “club guys”, while Corbin called Nigel a “top bloke”.
Nigel shared the same sentiments, and said it had been “an honour” to run out on to the field alongside Corbin, a captain who led “from the front”.
The 100-capped players also had their families and friends at the sidelines of their milestone matches, with Nigel pointing out the fact his girlfriend, Shannen Middleton, had “put up with a lot” during his 11 years in the jersey.
The McClinchy Cup final is set for Te Aroha in July.
The cup was won by Waihī in 2018, Te Aroha in 2019, Whangamata in 2020, and Mercury Bay in 2021.