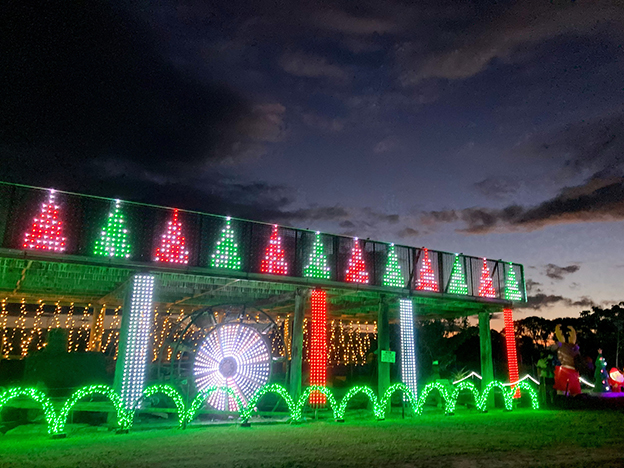 While the Christmas Light Show would always remain the maritime park’s priority, all-year lighting could be utilised throughout the year for other events. Photo: KELLEY TANTAU

It could feel like Christmas every day with Paeroa Maritime Park’s plan to be lit all-year round.
The museum at the entrance to Paeroa has started working towards installing permanent, colour-changing lights around the park. It is famous for its Christmas Light Show which attracts thousands each December, but assembling and dismantling the twinkling decorations had become unsustainable for the ageing volunteers, chairman Colin James told Hauraki District Council.
They would need around $40,000 to fully equip the park, and this year, they set a target of $10,000 which was reached after a donation by Mayor Toby Adams in June.
Mayor Adams added to the $2,200 already raised by the park by granting $7800 from his Mayoral Fund.
“This is something that is going to last, it’s not a one-off fix, it’s an investment into the 10, 15, 20 years of the maritime park, so I felt it was a good, worthy cause,” he said.
Over the last two years, the Historical Maritime Park has created new pontoons and pathways, and organisers are now planning its 2022 Christmas Light Show.
While the holiday-season show would always remain the park’s priority, Mr James said the new lights could be utilised throughout the year for other events.
“An example could be Anzac Day,” he told The Profile. “If we wanted to dedicate the day to our Anzacs, we’re hoping to be able to turn the whole park red. You could do green for Saint Patrick’s, you could do pink for Pink Ribbon Day… so we’re aiming to be able to create an event around the lights.”
Mr James said receiving the “large sum” of money donated by Mayor Adams had a huge effect on the park’s fundraising efforts, and they had now extended their $10,000 target.
“I think getting that Mayoral Fund straight away just was a huge sigh of relief. That’s huge for us and just ensures [the park’s] future.”
Paeroa ward councillor and maritime park volunteer Jo Tilsley said the park had “been a labour of love” for a small group of “incredibly dedicated” people for quite some time.
“This group is working really hard to future-proof the park beyond their tenure and into the future,” she said.
“It is definitely one of the jewels in our tourism crown and so very deserving of support.”

From Waihī streets to recording studio