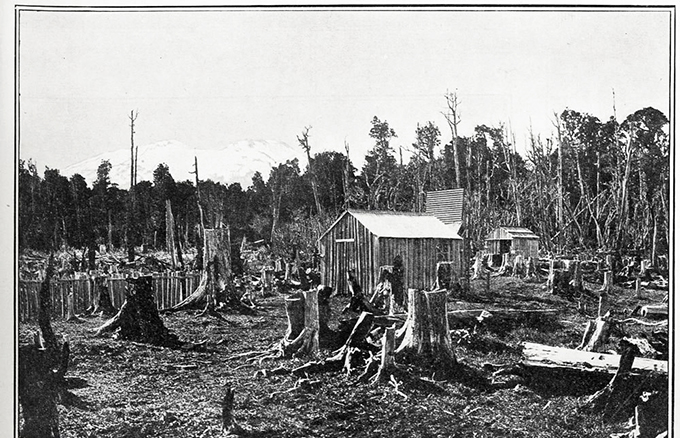 The genesis of a bush farm – a shanty and stumps. Photo: SUPPLIED

The dynamite was frozen too hard for John Adamson of Netherton to light it on a cold July morning in 1896.
Rooting out tree stumps to clear his farm was a challenging job; removing the bigger tree stumps sometimes needed the force of dynamite. Around 8.30am John brought four plugs of dynamite into the kitchen, laid them on a shovel and held them over the fire to soften. His wife Christina and 15-year-old daughter Louisa were close by him. Suddenly the dynamite exploded, the shock of it passing miraculously over Mrs Adamson, but severely injuring John and badly wounding Louisa.
Once the smoke and disorientation had cleared Mrs Adamson sought help from her son Frederick and a neighbour, John McDonald. Her husband and daughter were placed on board the paddle steamer Pātiki and taken by river to Thames. At the hospital Dr Williams found it imperative to remove John’s leg, which was done with the assistance of Drs Payne and Callan.
Both John and Louisa had survived but it was hard to say how they would fare. Great sympathy was felt for the family, as they were very industrious people, and highly respected.
John Adamson had married Christina Smith in 1873 and during the ensuing years they lived at the Hauraki Sawmill on the Waihou River at Turua where John worked. They had five children but two sons did not survive beyond a few days. In 1882 the family moved to Mill Road, Paeroa, near Gibbon’s sawmill and the next year their last daughter was born. They settled at the Netherton farm in 1887. John Adamson was instrumental in establishing the school at Netherton, where there were nine houses and fifteen school age children. The family all worked very hard on the property which was known as Penrose Farm.
The accident to John Adamson was not an isolated incident, there were numerous instances of explosions caused by thawing dynamite cartridges – baking, boiling and toasting being favourite methods. Despite the efforts of doctors and nurses at Thames Hospital, John Adamson, aged 53, succumbed to his injuries. He was buried at Shortland cemetery, Thames.
Louisa survived and spent a long time in Thames Hospital. When she recovered, despite having a hole in her hip, she carried mail on horseback three times a week between Netherton and Paeroa. In 1907 she and her sister Emily married two Innis brothers in a double wedding at Penrose Farm. Both brides looked bewitching, gowned alike in white silk dresses.
Louisa and Frank Innis farmed at Komata for 19 years before moving to Paeroa. They had three daughters, including a set of twins, but tragically lost a four year old daughter in 1915. Adversity again struck with the death of one twin in adulthood, resulting in the surviving twin adopting the twins of her late sister.
By 1965, Louisa had lived at Nahum Street, Paeroa for 40 years. Although almost blind she still cooked meals and knitted for sufferers of leprosy. Ten years later she was the oldest ex-pupil to attend the centenary of the Paeroa School. Louisa died in 1976, aged 95, and was buried at Omahu cemetery with Frank who had died in 1967.