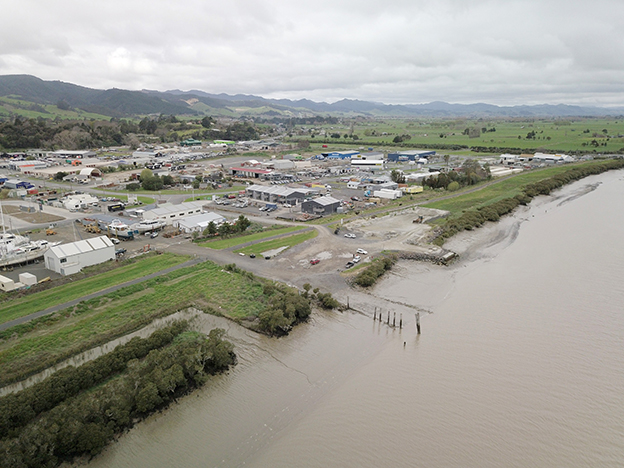 Thames-Coromandel District Council is hoping to use $4m in government funding for the Kōpū Business and Marine Precinct. Photo: SUPPLIED/TCDC

Little more than $4 million in “no strings attached” Three Waters funding has been earmarked to develop the Kōpū Marine Facility in Thames, after delays and cost increases left the project with a $6.58 million shortfall.
It could be all the money Thames gets from the $16m anticipated from the ‘Better Off’ fund, after councillors, including those in other Thames-Coromandel wards, wanted to note the town had now received its “fair share”.
The Kōpū Business and Marine Precinct would include a commercial wharf and pontoon, a public boat ramp and trailer parking area, and could bring economic returns of up to $58.5m over the next 30 years.
In 2020, $8.2m was approved by the Government’s Provincial Growth Fund for its development, but the final cost of the project has doubled to $15.3m.
Although a council report said the facility had been consented as “regionally significant” and there could be a case for some of the shortfall to be funded through a district rate, Mercury Bay councillors put a stake in the ground and called for the project to be funded through local Thames rates instead.
“This is a Thames project, it has always been a Thames project – why in this late hour are we getting a district rate and where did it come from?” deputy mayor Murray McLean asked at the meeting on June 28.
“This has huge ramifications around the district.”
A week earlier, the Thames Community Board set aside $1.4m to make up some of the facility’s shortfall.
Now, elected members have voted to put an anticipated $4.05m into the project, from the government’s Three Waters Better Off Funding, offered by the Department of Internal Affairs.
Thames-Coromandel District Council is expected to receive $16m from this fund, and applications for the first tranche of $4.05m are now open.
If council is successful, it could receive the money as early as this month. There are no obligations or “strings attached” to the government’s Three Waters reform, it said.
Thames ward councillor Sally Christie asked whether a note should be added to say Thames had “had its share” in the expected $16m, as “fairness” to the other wards.
This was supported by councillors from Mercury Bay and Coromandel-Colville, but fellow Thames councillor Robyn Sinclair didn’t want to cut the town off from any future funding opportunities.
“I would argue that because we don’t know what the future projects are and we don’t know how much money is coming, we would be doing our ratepayers in this ward an extreme disservice to cut them out of any future funding,” she said.
“I’d like to think that we are all mature enough in our roles as district councillors to look at a district project and weigh it up against the merits of funding available, rather than trying to cut ourselves off at the knees now.”
A formal note to say Thames had received its share of funding was not added to the resolution.