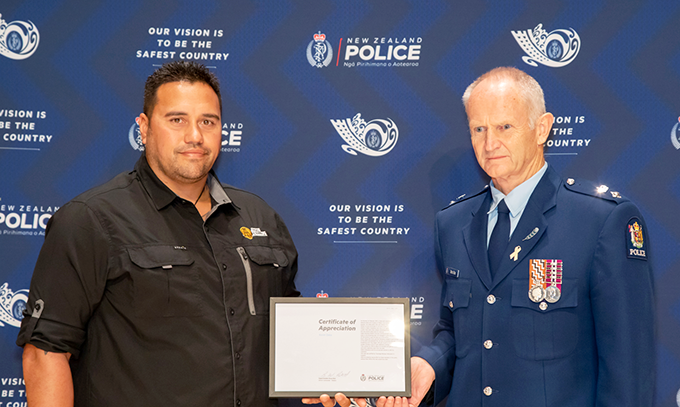 An “eerie” white light showed Kevin Peka where a drowning man lay at the depths of a Karangahake Gorge swimming hole during an heroic rescue last year.
“[It] would’ve been about four or five metres deep and very dark but when we found him, there was a white light to say where he was – it was a very eerie feeling,” he told The Profile.
The underground project leader for Alton Drilling in Waihī was awarded a Waikato Commissioner Appreciation Award in May for rescuing the man from the Waitawheta River at Dickey Flat Waterfalls in February last year.
Kevin still doesn’t know the identity of the man he saved, but said it was an Asian gentleman close to his 30s who “didn’t speak English”.
On the day of the rescue, Kevin had finished swimming with his two sons, Paitoa and Piriora, when he was told a man was submerged downstream.
“[I was] sitting on the other side of the river with my kids, and I’d seen three Asians come down and cross the river fully clothed.
“[It] would’ve been a good three minutes and then [one of the group] popped up and just casually swam towards us, pulled himself up on the rocks, caught his breath and spoke to the female, and she turned to me and said can you help my friend?
“I was like where is he? And [they] just pointed at the river and said down there.”
Kevin swam down the river and dove under to scan the river floor for the man but couldn’t find him. When he dove under again, he was joined by a bystander named Adam, who’d been sitting on nearby rocks.
The pair found the man on the bottom shortly after – he was fully clothed in a tracksuit and jumper.
When they pulled him out of the water, the man was unresponsive with no pulse.
“It was quite scary, he was very pale white,” Kevin said.
“We both pulled him up, I took over and swam to the bank, pulled him on to the rocks, and started doing CPR. But where we had him placed, I wasn’t getting full compression, so I had to drag him up the bank.
“Once I got him up the bank to a flat surface [I] started CPR and another bystander, Ann, she came and did mouth to mouth while I did the compressions.
“That went on for about 20 minutes until we got him back and put him in the recovery position.”
Kevin said while he was performing CPR, two young guys who were walking past ran off to contact emergency services.
Within an hour, ambulance staff, police and the fire service arrived and the fire service carried the man to a nearby farm where he was airlifted to Tauranga Hospital.
Kevin said having first aidtraining did pay off.
“A lot of people do it but don’t really take [it] in, thinking they’re not going to be able to use it.”
Kevin said he didn’t learn of the man’s fate until he received a text from Hamilton Police on April 27 saying he’d be receiving the award.
“They had a message that the guy was alive, so that was a bit of comfort there after all these [months].”
Kevin said his family and work colleagues were “over the moon” about his award.
“I’m not the guy to sort of put it out there, and they finally got it out there, and even [Waihī] mine had a big talk about it,” he said.
“To receive an award, I thought: it’s just the Kiwi way.
“If someone’s in trouble, anyone would just help, [I] wasn’t really expecting anything from it.”