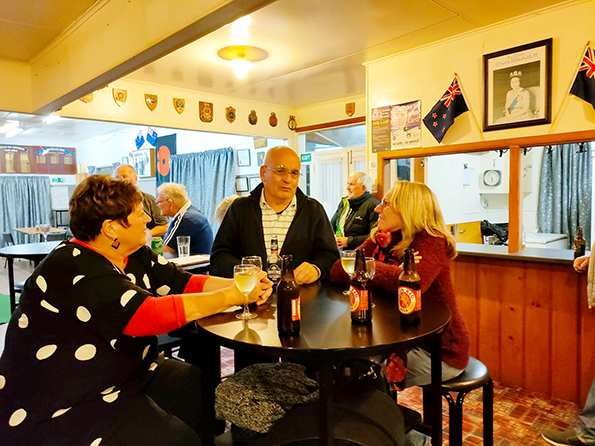 Ngatea RSA have reopened their doors on Friday nights for the first time in years.
Committee member Trevor Birchall told The Profile Ngatea RSA’s new committee of eight people wanted to make Friday nights work.
“There’s a couple of old hands and the president hasn’t changed but the treasurer has changed [to Gayle Coe] and the secretary has changed [to Richard Coe] and you’ve got me as their publicity officer,” he said.
“With those new people, we want to do something with it because the building wasn’t being utilised as much as it should be.
“We’re not reinventing the wheel, we’re just turning the clock back to what it used to do forty years ago.”
Trevor said he advertised on Facebook and through word of mouth to keep its first Friday night, which was held on May 27, “very low key”, and had 16 or 17 people attend.
“They all mixed extremely well… they came from Kaiaua, Paeroa, Kerepēhi, all over the district. A lot of them came to play snooker because they saw the picture of the snooker table.
“The snooker table was busy all night, others put the bowling mat down and played bowls and others stood around and drank and mixed.
“Just about everybody who went came and thanked me and said they’d be back next week and bring friends with them.”
Trevor said Ngatea RSA, located on Orchard West Rd, also had a dart board available and cooked meals, such as fish and chips and sausages. Opening hours were from 4:30pm until the call for last drinks at 7:30pm.
Trevor said he hoped Friday nights would also allow Ngatea RSA to build its membership, with a couple of new members signing up on opening night.
“Every time we’ve opened the doors or talked to other people we’ve got a couple of members,” he said.
“They don’t have to be a returned serviceman to be in the RSA… it’s $40 a year and once you’re a member you can get into any RSA or affiliated club right throughout New Zealand.”