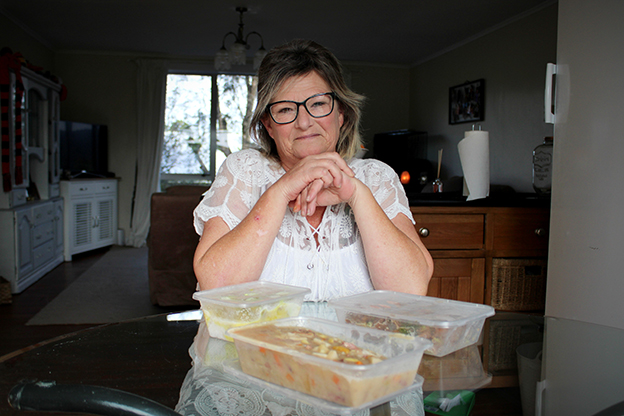 Sandra Fisher spends an extra $200 a week at the supermarket.
Once her own groceries have been bought and paid for, she purchases ingredients that she will use in meals she then delivers around the community for free.
It’s an act of altruism that first started in March this year.
“It was a bit of a lightbulb moment,” she told The Profile.
“I was cooking with the baptist church and it was just [seeing] the quantity of food… I thought to myself: if this all goes – and it did – there is such a need.”
After Sandra launched her Facebook page – Waihī Frozen Meals – she hit the ground running and was making 91 meals across three days.
Now, she is making 91 meals in 24 hours.
“I knew there was a great need out there, but I probably didn’t realise it would become a full-time thing, but it definitely is,” she said.
Sandra has been cooking at The Salvation Army in Waihī, and alongside two volunteers, she once spent 10 hours making 160 meals.
The meals are then frozen and hand-delivered to pensioners and families throughout the Hauraki town.
“I don’t ask for stories. If people reach out, then I’m giving,” she said.
“There were quite a few isolating [from Covid] who didn’t have the means to get food, and I have regular people who are mostly of the older generation, or people that have had accidents… then there are some people who have weeks when they just can’t make ends meet.”
The multitude of meals are kept in Sandra’s stand-up or chest freezers, and are divided out depending on people’s circumstances and the size of the household.
But with the rising cost of fresh vegetables, meat, and dairy products, Sandra said her mission was becoming “a struggle”.
She’s “one of those” people who shy away from asking for help, but is calling on monetary donations, or donations of food or petrol vouchers, to keep her cooking.
“All of that would be great,” she said.
Sandra also has a dream of expanding into a ‘meals on wheels’ service, delivering a hot meal to those in need of a helping hand.
“I want to get it going as soon as possible… because there is no service here. When you’re dealing with people with alzheimer’s or dementia… they’re kind of left to cope on their own, which to me is wrong,” she said.
“It all depends on the funding, but the ultimate would be to have a hot meal delivered Monday to Friday, and maybe sandwiches and a little dessert.”
Sandra has been making meals such as vegetable or chicken fried rice, curried sausages, homemade soups, pasta dishes, and when she was given roast meats, she dished them up alongside mashed potato and veggies.
DETAILS: If anyone can help source a space for Sandra’s service, or is interested in donating, contact Sandra via her Waihī Frozen Meals Facebook page.