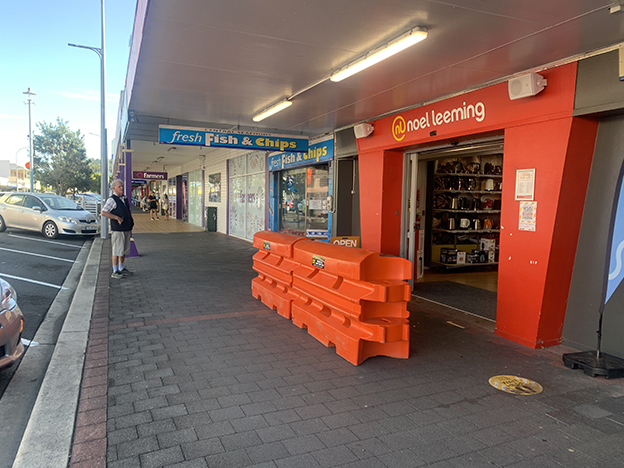 A temporary bollard has been placed outside Noel Leeming in Thames.

A district council has clarified its stance on bollards outside vulnerable stores: resource consent is not needed, but installation will be dealt with on a “case-by-case basis”.
The about-face follows Thames-Coromandel District Council previously telling The Profile consent was needed for shops at risk of ram-raids to install bollards outside their premises. However, during a meeting with police representatives, Mayor Sandra Goudie said that was not the case.
“We don’t require resource consent for bollards… that was something someone told us they thought was the case, but it’s not,” she said.
Following regular raids at Thames retail stores, service stations and superettes in recent months, Noel Leeming has elected to install their own orange bollards on the sidewalk, which council said was a temporary measure until something more permanent was put in place.
Mayor Goudie said security measures such as bollards could detract from Thames’ heritage aesthetic, but they could have their own “heritage look”.
“I think it’s a bit of a balancing act really, and quite frankly, I’m not adverse to having the bollards put in place for the shop owner’s protection, [but] that would have to be done in conjunction with council.”
According to council, in the first instance, business owners were expected to speak with the police, their landlords or the property owner and their individual insurance companies to determine the level of risk to their business and what protective measures could be taken within the property. These measures could include removable reinforced barriers at the entrance or internal grills to prevent access.
“If there are no practical measures that can be taken within the property, our council would be happy to discuss options for the provision of bollards or other measures in front of the property to restrict vehicle access,” it said.
However, bollards would not be considered if they reduced the footpath width below 1.20m or obstruct access to any adjacent premises.
The topic of bollards was brought up in a May 16 meeting between Mayor Goudie, Police Superintendent Bruce Bird, and Detective Senior Sergeant Andrew Saunders regarding the recent ram-raids across the district. Superintendent Bird said since February, Waikato Police had dealt with 150-plus offenders, and had laid “750-odd” charges.
“In the Waikato, there are no communities exempt from the offending; the offenders are principally youth,” he said.
“We take these offences very, very seriously and we’ll bend over backwards to try to apprehend the offenders and hold them to account.”
Superintendent Bird said there were three police cars within the eastern Waikato patrolling throughout the night. Eight years ago, there was zero.
“There was a lot of feedback from the community, and in Thames in particular, about getting the Thames station back to 24/7.
“We do have that capability to support that, but there is also a realisation that the resource has to move across the area depending on what the priorities are that are coming up at any one particular time,” he said.
DETAILS: Bollards or other measures can be requested by emailing TCDC’s roading team. Council reserves the right to specify the type of bollard to be installed to match existing streetscape designs. If the request is successful, unless agreed separately, council will undertake the work and recharge all costs to the applicant. For info visit: tcdc.govt.nz/bollards.