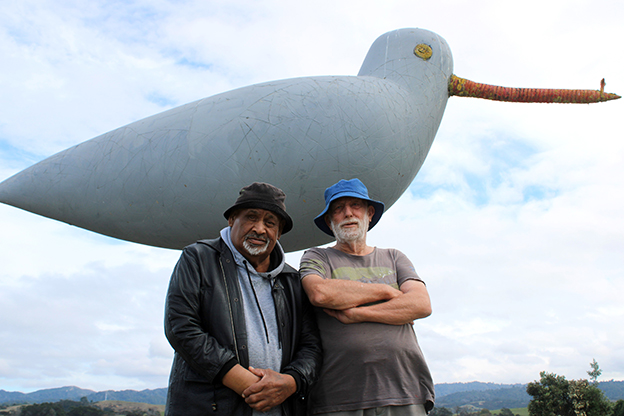 As the sun rose over the western shores of the Firth of Thames, a three-metre tall black bird – the mother of all oystercatchers – was unveiled in all its glory.
But even as its sculptor Tony Johnston basked in the four-metre long testament to Kaiaua’s wildlife, there were things he wanted to change, to add; ideas he wished to expand upon.
Now 17 years after the dawn ceremony that welcomed ‘Torea Mangu’ to its perch in coastal Hauraki, Tony will be able to see the sculpture finished as he first intended.
Torea Mangu – black oystercatcher in Māori – has become a landmark, and on a blustery Wednesday, it is flanked by RVs using the scenic spot as a place to rest.
“My intention was to make it sort of like the Lemon and Paeroa bottle, a bit of an icon, but I was expecting to make it look a lot better – which I intend to do this time around,” Tony tells The Profile.
The Kaiaua artist has been in talks with Hauraki District Council about giving the bird a fresh paint job, and its terracotta beak will be glazed red. Tony’s vision also sees red tiles going down the bottom of the concrete plinth, and the bird’s legs will feature individual ceramic rings, made by Tony at his nearby Penguin Studio.
“I’ve been going to do it for ages, but the impetus is because there’s more of a deadline now,” he says. “I can do it now while I’m still alive.”
Torea Mangu was a project funded by an Auckland Regional Council arts allocation to the-then Franklin District Council. It was constructed over three years, and while it did have community support, the bird faced some criticism.
“There was a ‘for’ and ‘against’ camp, shall we say… but that’s all gone now,” he says.
Tony is no stranger to controversy.

In the early 1980s, he was commissioned to create a 10-panel mural based on the life of Rua Kenana, a Tūhoe prophet. The work caused a little grief when it was suggested it be installed in the Manukau City Council chambers.
The mural was given a six-month trial, and was voted to remain where it stayed until the council amalgamated with Auckland in 2010.
Tony, now 76, “made a conscious decision” to take up art in his late-30s.
In 1978-79, he studied pottery with New Zealand artist Peter Stichbury and began painting full-time. During the mid 90s and early-2000s, he was represented by art dealer Warwick Brown and Portfolio Gallery in Auckland.
Tony confesses he was a popular artist “earlier on”.
“But I didn’t like the popularity much,” he says.
In constructing the 2.5-tonne concrete oystercatcher, he enlisted the help of another local Kaiaua artist, Thomas Waata, who aided Tony in defining the final shape of the bird.
Other artists, such as Brody Ruinga, Brett Spicer, and Michael Stehlin, have also assisted in “various bird activities” over the past 10 years, Tony says.
“The best thing about this,” he says, staring up at the bird which has lost about a knee-length in height due to coastal erosion, “is how many people can build something like this with their name on it? Isn’t that ego to the max?”
Hauraki District Council says it isn’t funding the “much-needed facelift” for Torea Mangu, but it is making sure Tony has everything he needs to do the work. They also supplied the scaffolding – which is up now for around a three-week window.
A spokesperson says the council inherited Torea Mangu a long time ago, and believes the community are “quite proud of the iconic sculpture”.
“It is pretty unbelievable,” Tony says. “I think I’ve been blessed in some sort of strange way, and it’s not because I’ve been particularly good or anything.
“This is the time to do it, now that [the area] is all opening up.
“I’m motivated and I can’t put it off much longer.”
And when he’s asked to describe his artistic career, spanning across four decades, Tony simply says it “beats working in a bank”.
DETAILS: To contact Tony, visit: penguinstudionz.com