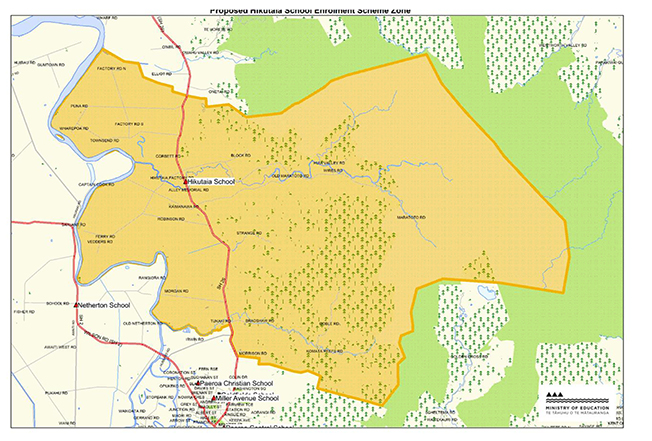 A new enrolment scheme for Hikutaia School may exclude students hailing from nearby Paeroa.
The Ministry of Education is currently working with the board of the rural school along State Highway 26 to implement a new enrolment scheme to help manage the risk of overcrowding.
The proposed new zone will stop after Morrison Rd, south of Komata.
Hikutaia School principal Wayne Whitney said around 37 per cent of the school’s current students lived outside the proposed new zone. That was 51 of the kura (school’s) roll of 135.
“We have capacity for five classrooms at present; however, this year we have remodelled the library and turned that into the sixth classroom,” he said.
“In order to get extra classrooms from the ministry, we need to have an enrolment scheme in place.
“If we were to get extra classrooms, then we can accept more students at Hikutaia School.”
Students already enrolled at a school before a home zone is implemented or changed are entitled to stay at their current school; but if the proposed zone change goes ahead, applications for students who live outside the area will be processed in order of priority.
According to the ministry, first priority will be given to applicants who are siblings of current students, then to applicants who are siblings of former students, then to any applicant who is a child of a former student of the school, then to who is either a child of an employee of the board of the school, or a child of a member of the board of the school.
Finally, sixth priority will be given to all other applicants.
Matua Whitney said it was “too early to tell” the school community’s response to the proposal ahead of a consultation meeting next month.
“However I have received three emails from some concerned parents out of zone with preschoolers who want to have their kids attend Hikutaia,” he said.
“Luckily for them, due to the priority list being ex-students, and parents who attended the school, they will be accepted in a school ballot.”
Following the June meeting, the ministry will consider all feedback and consult with the school board before making a final decision.
It expects the school community to be updated about progress made towards the end of Term 3, while the new schemes and changes were expected to come into effect for the beginning of Term 4.
“This is new for Hikutaia and we want to get it right, and ensure future parents who want their kids to attend Hikutaia are able to be included,” Matua Whitney said.
“We will be managing this new phase with great interest. Perhaps with the growth in the area, the ministry will look at adding new classrooms for our school.”
DETAILS: A consultation meeting will be held at Hikutaia School on June 1 at 2pm to provide further information and gather feedback from the community. More info at: https://consultation.education.govt.nz/