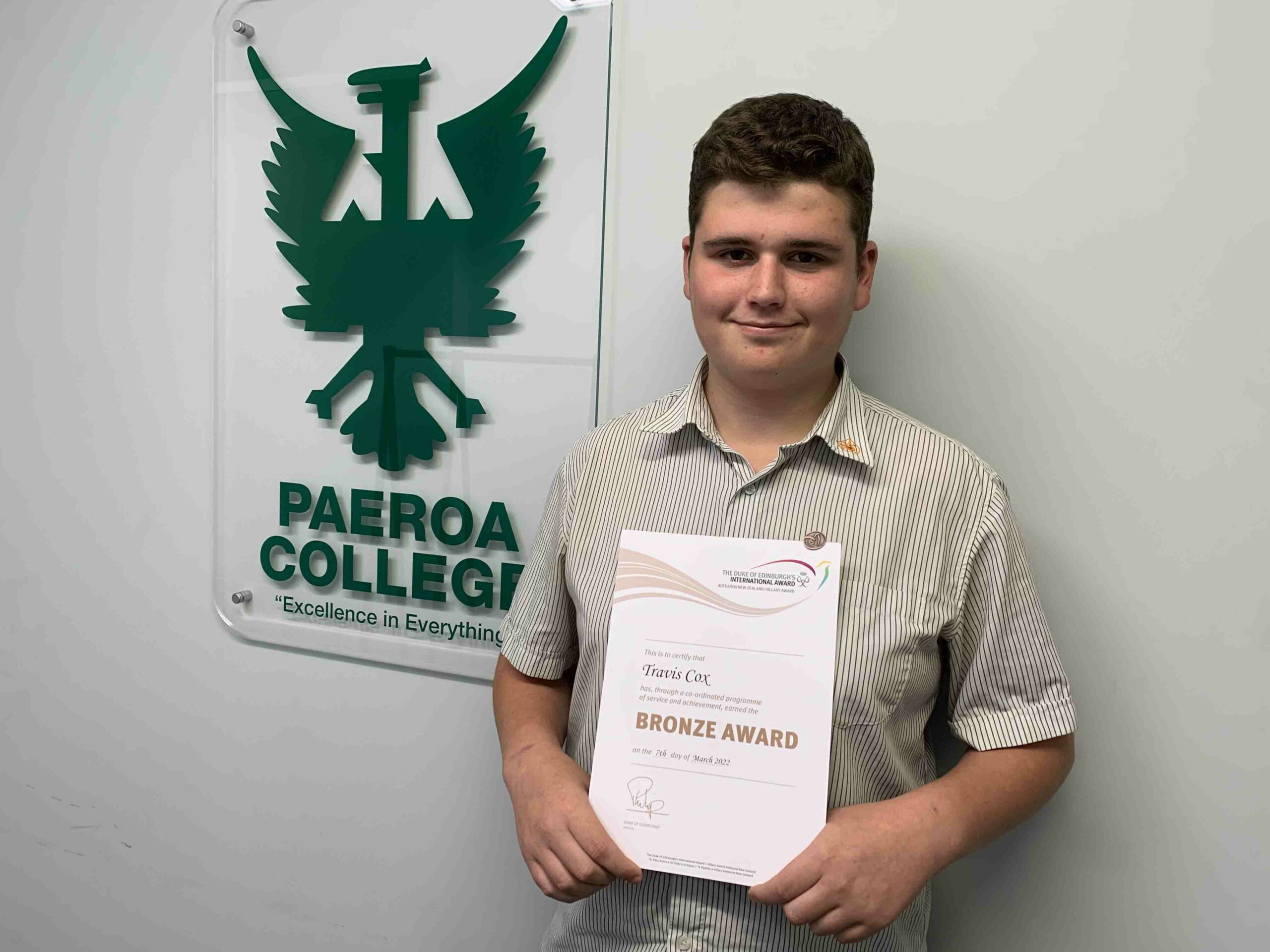 A year 11 Paeroa College student has become the first to receive a Duke of Edinburgh Award for the college in many years.
Travis Cox has received the bronze youth achievement award after completing the award’s four sections – voluntary service, physical recreation, adventurous journey and skills. The sections had to be completed and signed off within three months and one within six months.
Travis told The Profile he was “pretty pumped” after receiving the award.
“I told everyone about it and some didn’t really understand so I had to kind of explain it to them,” he said.
Travis said his mum, Penny Cox, who is also the college’s head of extracurricular activities, encouraged him to take part in the Duke of Edinburgh award.
“Mum just told me about it… she said you can, if it wasn’t [for] Covid, could go and meet the Duke of Edinburgh, and so I thought it would be a cool idea.”
Travis said he did motocross on a track near his home for his physical recreation, his Year 10 Camp in the Kauaeranga Valley counted as his adventurous journey, drumming for his skills and taking care of the college garden for his voluntary service.
In addition, Travis also helped with the college’s student breakfast every second morning.
Travis said taking drum lessons over Zoom last year due to Covid-19 was one of the challenges on his quest to achieving bronze.
“The teacher would say it sounded great, and the next minute I’d be playing the exact same way and then she’d be like it doesn’t sound the same and I’d be like yeah nah it definitely does,” he said.
Penny Cox said the college was “super proud” of Travis and wished him all the best to achieve his silver award this year. “We’re using Travis as our star, and now we’re hoping more will follow,” she said.
“Wouldn’t it be great if in three years’ time, we got Travis up there with his gold and 20 kids up there with Silver and 50 kids up there with bronze, that’s what we want to be doing.”
Penny said the college will work to get more students taking part in the award.
“Our first barrier is that it’s $80 just to enrol for a bronze and then [the price] goes up from there, so it’s not a cheap thing,” she said.
“But we’re looking at trying to overcome that because we don’t want anything to stop a child from being a part of something they want to do.”
Penny said she’ll be making the award available for Year 10 students to take part in this year.
“Many kids are already committed to sport so that’s their physical already, if they’re already involved in a community activity they’ve got their [voluntary] service, if they go into Year 10 camp then we can use that as their expedition.
“So they’ve got three out of the four [sections] already so it’s quite encouraging to show the students they can do this and get an award for it that they can be proud of.”