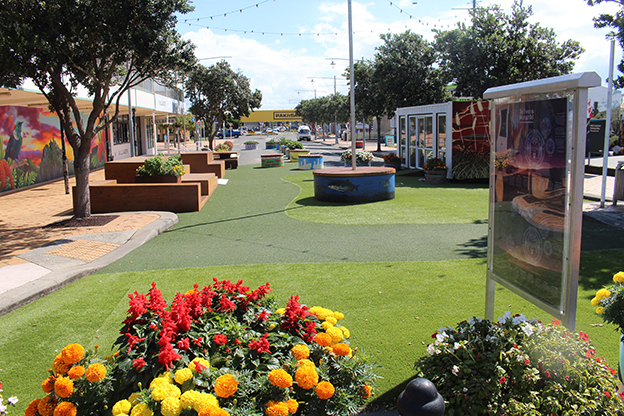 A petition in support of Thames’ Create the Vibe has been presented to council one month after another petition called for its removal.
Shaz Kerebs told the Thames Community Board last week that she, and the 100 signatories, wanted The Vibe and Mary St closure to become permanent.
Her presentation followed one given by Sheryl McConnell and Heather Fowler in April, whose own petition amassed 641 signatures and called for Mary St to reopen to traffic.
“Sure, this area has changed vehicle access routes through Mary St, but it has also created a pedestrian-friendly area right in the heart of Thames,” Shaz told elected members.
“It has also showcased the amazing talents of [local artists] Rick Fisher and Kylie Gunn.”
Mary St used to connect shoppers in Pollen St to travellers in Queen St through the CBD’s only roundabout, but in 2020, Thames-Coromandel District Council closed the high-traffic thoroughfare to create ‘The Vibe’ – an open space with festoon lighting, tables, and garden planters.
Shaz said the area had helped to create a “real atmosphere” in the town she had lived in for more than 20 years. “These sorts of initiatives will be increasingly more important as we move towards less congestion on our roads and more community-serving public spaces,’’ she said.
“This area, if it becomes permanent, will continue to gain popularity, and it can evolve as its usage increases.”
The Mary St closure was said to be a “temporary” project of up to two years, and was 90 per cent funded ($320,125) by the Waka Kotahi NZ Transport Agency through its Innovating Streets pilot.
Thames Business Association chief executive Sue Lewis-O’Halloran also presented to the community board the results of a survey conducted among the business community. In it, 57 per cent of respondents didn’t think Create the Vibe had been a success.
“[It has] caused far too much negative discussion for it to be a success,” one said. “[It] needs to be relocated, as this street is a vital through-road across town.”
“Rethink the whole plan – there seems to be so much bitterness in some parts of the community about it,” another said, before adding: “TCDC seems to have had a high turnover of staff in various areas, and this affects public perception of trust in what’s happening and how decisions are made. I personally support the closure of Mary St and the Vibe concept in principle.”