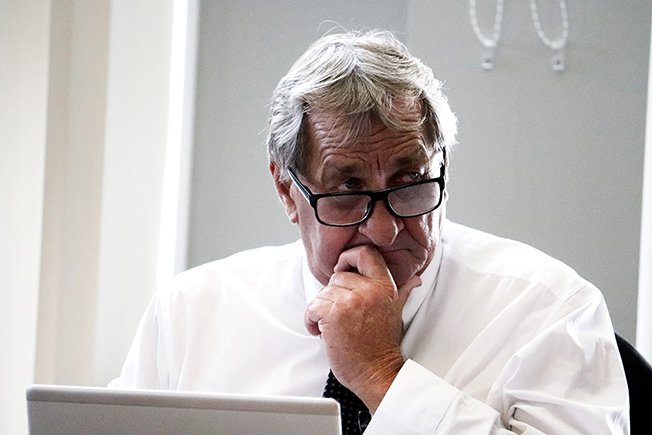 Rodney Garrett received 1066 votes to become a Hauraki District Councillor for the Plains ward back in 2019. File Photo: KELLEY TANTAU

They told me I had less than 12 months to live,” he said. “That was 14 months ago… I just rolled my sleeves up to fight.”
Rodney Garrett has been battling cancer since the last local body election, when he received 1066 votes to become a Hauraki District Councillor for the Plains ward.
“Probably in fairness, I’m not the man I was a while ago. I had this thing growing around the time of the election. Not many know that,” he said. “But I took it on the chin.”
Outgoing councillors are usually presented a token for their work after an election, either if they retire or did not retain their seat. However, due to Rodney taking extended leave because of ongoing health issues, council staff acknowledged his “passion and empathy” with a tearful presentation during its April 27 meeting.
“Your commitment to turn up to these meetings has blown each and every one of us away,” Mayor Toby Adams said. “You’ve persevered… Not a lot of people do that.
“It’s been a pleasure working with you and it’ll be a shame to the community to not have you sitting around the table in the future.”
Rodney, in his 60s, has lived within the Plains ward his whole life. He currently resides in Kerepēhi and his passion for the town was acknowledged by his colleagues.
“You changed Kerepēhi from being a place I’ve driven past since the 70s, [seeing] a great big pile of tyres or a big heap of sawdust, and now I realise decent, real people live there and thanks to you for that – you’ve changed me for the better,” Waihī councillor Duncan Smeaton said.

“Kerepēhi has been rather spoilt by the way you have presented on their behalf,” fellow ward councillor Ross Harris added, joking that Rodney spent “far too much bloody time” at the town’s bowling club – where Rodney was past secretary and president.
Rodney was also past secretary of Kerepēhi Rugby Club; past president of Thames Valley Bowls; and for more than a decade, president of Thames Bowling Club.
Fellow first-term councillor Rino Wilkinson, who was Rodney’s former neighbour, said it was a “pleasure” to have seen Rodney walk up the council steps the same time as he did, while Waihī ward chair Anne Marie Spicer used the same word to describe sitting next to Rodney this term.
“You are one of these rare breeds of councillors who speaks when it’s only necessary, and when you do, it’s always worth listening to,” she said.
“You were a great reality barometer because when other people were talking or presenting, you’d mutter quietly: ‘dead right, dead right’.”
Rodney’s family, including his daughters and a grandchild, were at the Wednesday presentation. He thanked them for their support, as well as council staff.
“When you’re a district councillor, [you work for] the district, and I never lost sight of that,” he said.
“It’s actually broken my heart not to be able to stand again.”

Two years, two deaths due to alcohol in Hauraki district