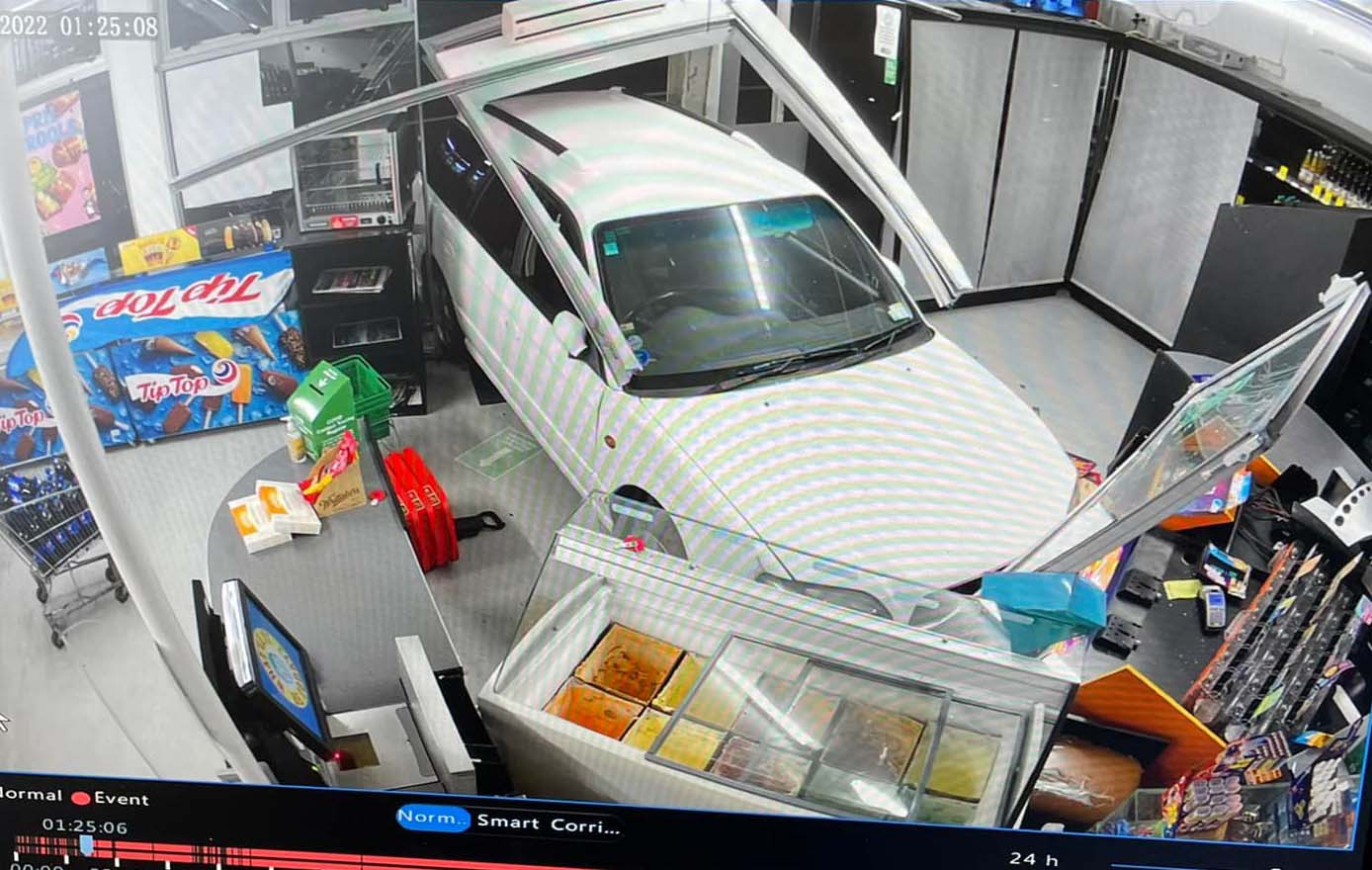 Four Square Martina in Thames was ram raided on Anzac Day, Its front entrance and Lotto till was completely destroyed. Photo: SUPPLIED

Two Thames stores are the latest to fall victim to ram raid-style attacks. Bollards could be the “effective deterrent” businesses need, but they require council consent. KELLEY TANTAU reports

Bollards could be the only thing standing between ram raiders and businesses – but standing in the way of bollards is council consent.
Following ram raids at a Thames electronics store and supermarket over the past few months, Thames’ Stirling Sports and Spark were also hit by assailants behind the wheel.
The crimes occurred on the same night last week, May 5, and a Spark spokesperson told The Profile its front glass door was significantly damaged in the raid.
“We have a high standard of security across all of our stores to protect our people and inventory, and are considering further measures to increase security,” they said.
Bollards, typically made from steel, are used at storefronts to reduce harm and damage from vehicles by acting as physical protectors.
In Thames, Noel Leeming installed its own bright-orange bollard after its entrance was destroyed by a holiday season smash-in.
But the bollard was put up without consent, which was needed, Thames-Coromandel District Council said.
The store was preparing plans for something more permanent, and the temporary bollards were allowed to stay in the meantime.
At Four Square Martina, the second of the two Four Square stores in Thames to be ram raided, owner Jaswinder Singh was talking to a company about the new roller door he will have to install after the fourth attack on his business since December.
“This has happened many times now, and this is the worst – the cost is very high to us and we’re losing a lot of customers,” he said.
The ram raiders smashed into the store around 1.20am on Anzac Day, destroying the front counter, which contained the shop’s Lotto till. However, the offenders fled the scene with no loot.
“It’s not anything we can control,” Jaswinder said. “But this is not easy.”
He also said the store would be happy to put in bollards for an added security measure, if granted approval by council, but Thames-Coromandel District Council’s communications and economic development group manager Laurna White said bollards should be “considered a last line of defence.”
“Ultimately, crime is a
policing and social matter and our council would like to support the work of police, social service agencies, business associations, and other community groups to lower crime rates in all our communities,” she said.
While council would consider applications to install bollards in front of a given business, it would expect the applicant to demonstrate whether other security methods – such as secure cabinets for high-value goods, reinforced or shuttered shop fronts, and dye sprays – could first be installed in the premises, she said.
“Bollards are visually intrusive, obstruct the footpath, and can create insurance and liability issues for shopkeepers who would be responsible for their maintenance and repair,” she said.
But Coromandel MP Scott Simpson said council should: “tell that to the business owners who have stolen cars ramradied through their front window, doing tens of thousands of dollars worth of damage”.
“That’s intrusive and visually upsetting as well,” he said.
Mr Simpson said the current spate of ram raids, which had been happening all across the Coromandel electorate and throughout the country, was a sign of “general malaise” and the “soft on crime attitude” of the current government.
“That doesn’t mean this is the first time we’ve had issues like this.
“Several years ago we had a spate of ram raids as well, and I can remember the Stirling Sports was attacked then.
“The businesses decided to install roller doors and screens, but I noticed that in the raid of the Stirling Sports store [last week], they didn’t seem to have any effect at all; they’re still the victim of a ram raid,” he said.
“So, bollards are effective. They may not be what council considers visually attractive, but they are a deterrent to these young thugs who steal cars and drive them through the shop windows of hard working, local businesspeople, and I think council does have an obligation to work as seamlessly as they can with businesspeople from whom they collect a lot of rates and who are vitally important to the fabric of our community.”
Waikato Police earlier told The Profile it had set up a dedicated team to investigate this type of ram raid offending and were taking a “district-wide” approach. Waikato Eastern Area commander inspector Dean Anderson said young offenders were highly motivated and moved around the district.
“Our response to youth offending is in accordance with New Zealand legislative frameworks such as the Oranga Tamariki Act 1989, which dictates how we will proceed and progress with children and youth through the youth justice process.
“That being said, rest assured where we find repetitive offending – the offenders will be held to account.”
He encouraged businesses to continue reporting incidents of crime in order to identify, arrest, and prosecute adult offenders, and refer youths through the Youth Justice process in the area.