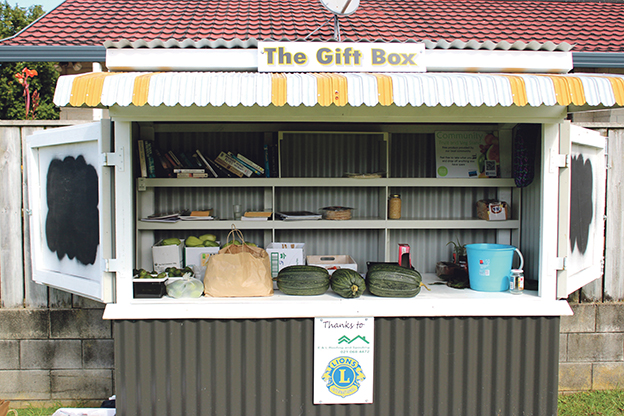 An elderly man reduced to living on one pension after the passing of his wife; Alzheimer sufferers who have forgotten how to cook; and people who steal toilet paper from public bathrooms because it’s either that or going without bread.
These are the stories told to Tina Wright, who runs The Gift Box in Waihī.
In her almost-four years of manning the community food stall, she’s seen mothers pull up with hungry children in the car, and couples who have fallen on hard times.
Lately, the need has grown.
“People who thought they were doing well for themselves, through no fault of their own, are now really struggling, and you can’t tell that from the sort of car that comes in, you need to actually talk to them and find out what their back story is,” Tina told The Profile.
“But twice in the last six weeks, we’ve run out of food completely.”
The rising cost of food and petrol, among other things, is an issue Coromandel MP Scott Simpson doesn’t believe people will see any relief from this coming winter.
He expects charitable organisaitons, food banks, and pātaka kai will “continue to see record demand for their services”.
The Gift Box was established in 2018, and Tina never expected there to be such a need in the community.
She said 20kgs each of potatoes, carrots, and onions would last for two days out in the stall, which she and her husband Keith continuously restock.
She also works with Sandra Fisher, who makes between 80-100 meals a day using the stall’s excess meat and veg, which are then frozen and distributed.
“I think the need is just so great that it’s overwhelming,” she said.
“We’re having to ask for donations much more often… and even those of us that are still managing, we’re not buying meat – the closest we get is chicken drumsticks, because they are the cheapest thing.”
Mr Simpson told The Profile he called in to Thames Pak’nSave recently and bought some groceries, and was shocked by the total at the checkout.
“You know when you go to the supermarket, and you have a mental calculator about how much you think the bill is going to be? The nice person on the checkout said the amount, and I just stood there with my mouth open,” he said.
“I thought: how can this small pile of groceries in my trolley be almost $100? And these were ordinary things – milk, bread, butter, cheese – those sorts of staples that are part of everybody’s weekly grocery shop.
“If products like that are going up in price literally every week, then New Zealanders are having to make choices about what they cut out of their weekly budget.”
Mr Simpson said, sadly, there was no immediate hope on the horizon.
“It means that people will continue to be under pressure, and charitable organisations, food banks and the like will continue to see record demand for their services and goods they provide.
“There are lots of fellow citizens in our communities who have lost their jobs, lost their business, don’t have the financial certainty of a permanent job, and they are under real pressure…
“This is going to be a very difficult winter for far too many people in our area.”
DETAILS: The Gift Box warmly welcomes any monetary or food, produce, and toiletry donations. The stall is located at 20 Mackay St, Waihī. For larger donations, contact Tina on 07 863 8588 or find The Gift Box on Facebook.