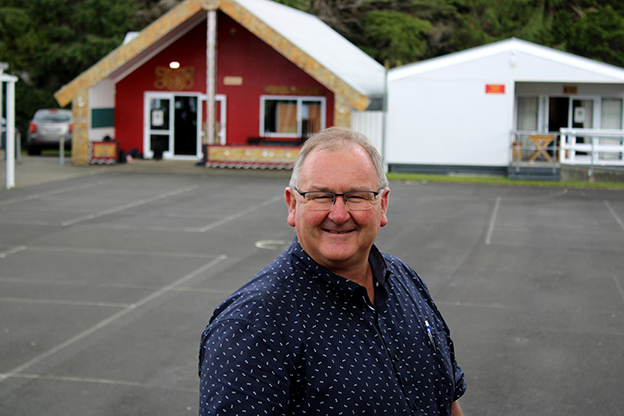 Waihī College principal Alistair Cochrane wants to welcome his students back to school, after Covid-19 anxiety has kept many of them at home. Photo: KELLEY TANTAU

It’s not the high school that is the Covid-19 “super spreader” – it’s the weekend, a Hauraki principal has found, and he fears the students electing to stay home are missing out on more than just their education.
For the past three weeks, Waihī College has been running at about 50-60 per cent capacity, yet principal Alistair Cochrane knows the number of his students directly affected by Covid-19 was closer to only 20 per cent.
But “a large number” of families were electing to keep their children at home, and while some of the reasons were justifiable – students being immunocompromised, for example – anxiety around catching the virus at the college remained rife.
“There is a degree of anxiety out there around schools supposedly being super spreader places, but the data is not showing that. What we see on a Monday morning are numbers that are astronomical compared to the rest of the week,” Mr Cochrane said. “So, it’s not the school that is the spreader, it’s the weekend.”
Covid-19 numbers have declined in the Hauraki district, from 329 active cases on April 1, to 200 cases on April 10.
However, Mr Cochrane believed as many as a dozen families in Waihī were electing to home school their children, despite only one application through the Ministry of Education coming across his desk.
“The seniors have NCEA as a motivator, so they tend to be a little more engaged than others; Year 7 and 8s’ attendance is far better than the rest; but the ones that really worry me are the Year 9s and 10s.”
Mr Cochrane said he was “absolutely worried” for the students’ education, as a lot of the “pre-work” needed for NCEA, which starts in Year 11, was part of the programming in Year 9 and 10.
He said electing to stay home was not just having consequences for the students, but for teachers’ wellbeing, too.
Since the pandemic began, staff at the school have juggled the use of two teaching platforms: online, and face-to-face.
Keeping up with both forms was starting to have a “significant impact”, Mr Cochrane said.
“We’re starting to see teachers becoming really tired and rundown, and that won’t be helping with their well-being.
“Now, as a community, we need to be standing at each other’s shoulders, fighting the battle together, not in isolated pockets,” he said.
“Whilst I understand parents’ fear and their anxiety, as a community, we need to get back to work, we need to get back to school.”
From the beginning of next term, which starts on May 2, the college will host ‘Get Back Week’ – in which there will be events and freebies up for grabs during the lunch break throughout the week, including a sausage sizzle, quizzes, marble run, performances, and games.
“The benefit of going to school is not just the academic learning that the student’s do, it’s the socialisation, dealing with diversities, the etiquettes – all of those skills that in a time like this are probably more important than they were before,” Mr Cochrane said.
“If they are unwell or a close contact, they need to be at home, but if they’re not directly affected [by Covid], they need to be back at school for their own benefit.”