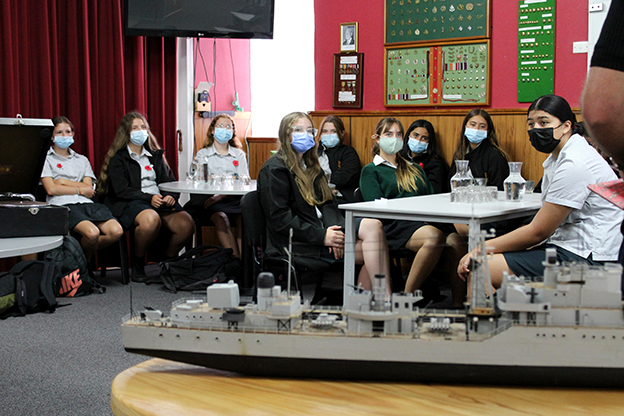 College students sat down with returned servicemen ahead of Anzac Day to hear their stories of service.
Filmed as part of a video made to honour the Kiwis who served and lost their lives in armed conflicts, Paeroa College students listened in as actor Mark Wright asked three returned servicemen about their time in war.
Danny Te Iri, Barry Maddern, and Richard Gabriel, answered questions such as: ‘Where around the world did the army take you?’ and ‘What does Anzac Day mean to you?’
Each of the three men had unique stories.
Mr Maddern, for example, joined the army in 1964 and finished his stint 10 years later, on the day before Anzac Day.
He served across New Zealand, and in Singapore and Malaya.
“My father served in World War II, my grandfather served in World War I. Because I joined the military, it became very important to me; even more so when I heard in 1965, one of my best friends had been killed by standing on a landmine in Vietnam.”
Richard Gabriel served in the English navy as a telegrapher from 1950 to 1957. He showed the students a model of a type of ship he served on called a Destroyer – a fast, long-endurance warship intended to escort larger vessels and defend them against short-range attackers. Mr Gabriel said it took “quite a lot” of hours to make his Destroyer model, having to construct most of it by memory.
Danny Te Iri served in the New Zealand army from 1963-1971 and saw active service in Malaysia, Borneo, and Vietnam.
He said his two uncles served in World War II and were “lucky to come home”.
“I had a lot of respect for them… and even today, I still remember all the guys we lost in Vietnam.”
Actor Mark Wright, who appeared on Shortland Street, worked with Hauraki District Council on its video series, Voices behind the Uniforms, which has been released in parts to the public on YouTube. It cost council up to $1500, funded through existing budgets, and showcased a series of Anzac-related monologues.
The Q&A with Paeroa College students was part of the footage.

Signatures amassed in support of widow