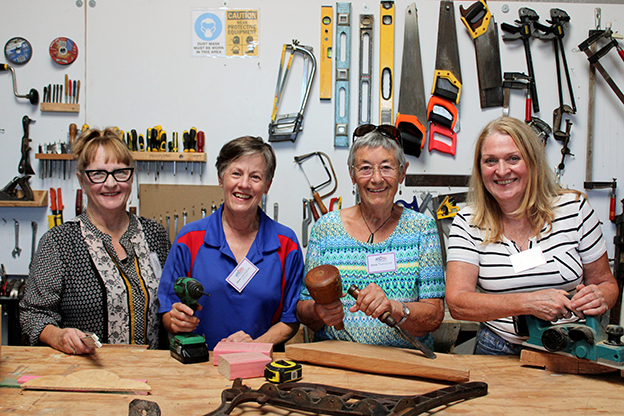 Women who had the tools but not the opportunity have been able to learn how to make and craft items from the blokes at Thames MenzShed – and perhaps impart their own advice on projects, too.
Since the Thames MenzShed, off Queen St, introduced a WomenzShed to the organisation in September last year, more than a dozen females have equipped themselves with skills in woodwork and carpentry.
Not only have they been building jewellery boxes and garden planters, but their confidence has been building, too.
“My grandson went overseas three or four years ago and left me a drill and his electric saw, and they sat in the garage for all that time, until I heard they had this WomenzShed,” Anne Thorneycroft said.
“It occurred to me that I could now go and use them.”
Fellow members Maria Hilton and Jane Lea also had the equipment, but they didn’t have the know-how. However, after joining, Maria was able to tile her own kitchen using the tiles she’d bought several years prior.
Meanwhile, Diane Adams came to the group as more of a sewer than a carpenter. She was used to working with materials where she could “take a bit in and let a bit out”.
“Working with wood, I just don’t get it, I can’t do that precise measuring,” she said.
But she was proud of the outdoor planter box she constructed recently, even if one corner was wonky and some of the boards were a bit too long.
“It’s a learning curve,” she said. “It’s a whole different world of terminology and types of wood, but coming here has nothing to do with my personal life, my work life, it’s just something I’ve wanted to do and never had the opportunity to do.”
The Thames Community MenzShed opened in 2018, and secretary Tony Winter said they had talked about establishing a WomenzShed back then.
He said 13 of the group’s 42 members were women, and they made up some of the most active users of the space.
“It’s added a dimension [to the group], and the women’s perspective is always good to have.”
The shed’s most important mandate was “fellowship” – where men and women could go to a safe environment, work on their own projects, and community projects, and fundraise for the shed’s maintenance and upgrade.
New members were always welcome, he said.
DETAILS: Get in touch with Thames MenzShed or WomenzShed, email: thamesmenzshed@amail.com or find the organisation on Facebook.