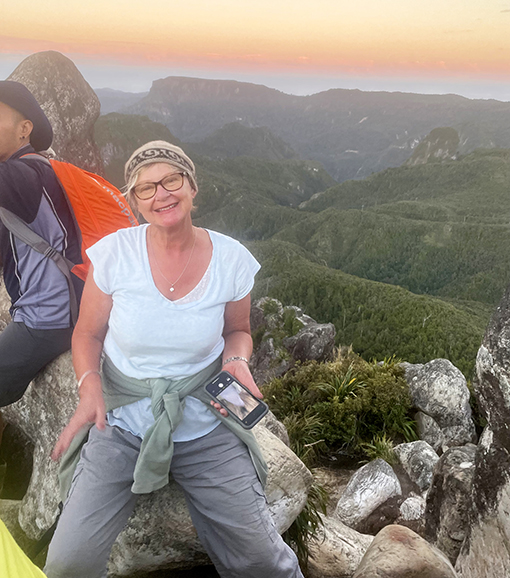 Alison O’Callaghan recently hiked The Pinnacles track as part of her training to walk the Tongariro Alpine Crossing to raise funds for Wendy Fergusson Photo: SUPPLIED

Waerenga woman Alison O’Callaghan plans to walk the Tongariro Alpine Crossing to raise funds for Waihī lung cancer patient Wendy Fergusson.
Alison said she’d never met Wendy but wanted to do more after reading her story on the front page of The Profile in February.
“I read it and it stayed on the kitchen bench for about a week and I kept revisiting it and I just thought what a dreadful, awful predicament to be in to have to possibly sell your home as well as contend with an illness,” she said.
“It just pulled my heartstrings, and I just thought I’m gonna have to do something here, and this is why I’m gonna walk and raise money to help Wendy.”
Alison, who is one of The Supported Life Style Hauraki Trust’s rehabilitation coaches based in Thames, said she then donated $50 to Wendy’s Givealittle page and contacted Wendy’s husband, Craig, to let him know her plans to raise more money for Wendy.
Craig told The Profile he was “gobsmacked” and “quite surprised” when he received Alison’s email.
“I asked her what made her do it and she said… seeing the photo of me with the wife and the dog apparently got to her so away she went,” he said.
“Alison’s a great human being and [I’m] super appreciative of what she’s about to embark on, it’s really good.”
Craig set up the Givealittle page for donations to cover costs of an unfunded drug called Imfinzi, after she was diagnosed with lung cancer in July last year. Craig said in February due to the full treatment cost of $208,000, he and Wendy were considering selling their Waihī home to pay for it.
However, since then, Pharmac has decided to now fund Infinzi from August, bringing the costs of Wendy’s full treatment down to $46,000, which means they no longer need to sell their home to pay for treatment.
Craig said he welcomed the news he and Wendy would no longer have to consider selling their home.
“It’s exciting and a great relief that we’re not having to sell, especially in the volatile market.
“[Pharmac] finally came to the party and it’s not just good for [Wendy] but good for everyone that suffers that horrible disease,” he said.
Craig said Wendy’s oncologist talked Pharmac into subsidising Imfinzi for Wendy from now since she was already taking the drug, rather than having to wait until it was funded in August.
Craig said Wendy was still having “ups and downs” through her treatment at Hamilton’s Braemar Hospital but was having more good days than bad.
“[Her hair’s] still growing back, but she does have a bit of skin issues like rashes coming up and spots, which is one of the mild side effects of the treatment, but apart from that she’s not really suffering,” he said.
So far, just over $11,000 has been raised through the Givealittle page to go toward the cost of Wendy’s treatment.
Alison said she had been training a lot for the 19km fundraising walk,which she plans to complete with her son, Rory. The pair will set out on April 22, which is also Wendy’s birthday.
“As part of one of our incentives, we have gym membership from the trust and I go four times a week.
“I also walked the Pinnacles two weeks ago, and that was quite a challenge,” she said.
Those wanting to support the fundraising walk could make donations to Wendy’s Givealittle page, she said.
“It doesn’t matter how little, it all goes to Wendy, and that’s the pure reason.”
Alison said she previously raised $2000 walking the Tongariro Alpine Crossing in 2014 to support a Te Kauwhata family with a nine-year-old boy who had a “debilitating disease”.
DETAILS: To make a donation: givealittle.co.nz/cause/help-wendy-finish-her-journey.