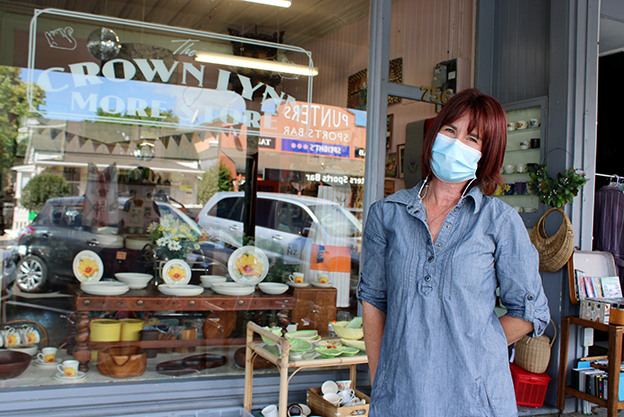 Monica Grafton dished out her own form of justice to a woman who was caught trying to steal from her. Photo: KELLEY TANTAU

The owner of a Crown Lynn store in Thames’ main street handed out her own form of justice after catching a woman stealing from her.
Monica Grafton, who owns the Crown Lynn and More Store in Grahamstown, chased the sticky-fingered thief down the street and scolded her for attempting to steal a stash of DVDs from the front entrance of the store.
The confrontation occurred on March 12 during the Saturday morning markets, when Monica’s husband Andy Lomax watched the woman hide DVDs in her handbag.
“We have suspected her for a while,” Monica told The Profile.
“My husband with his market stall has seen her a couple of times, and she’s come in and bought something and left. He came to me once and said: ‘Did she buy something?’ and I said: ‘Yeah, she bought some DVDs’ and he was sure he saw her put a handful in her bag.
“On Saturday [March 12] he saw her again and watched her and actually saw her do it, and she turned to walk away with them. He shoulder tapped her and asked if she was going to pay for them, and she panicked and put them back,” she said.
“I was inside, so he came in and said: ‘I’ve seen her, she’s just done it’ and I said: ‘Where is she?’”
Monica then “chased her up the street and told her what I thought about things”.
“I did say a couple of choice things to her, and I said I’m not happy about her stealing and basically to not come back, and I said it all very loudly with some extra words in there so that various shopkeepers and market stallholders could hear me,” she said.
“It was pretty much in the middle of the street so I probably embarrassed myself more than I embarrassed her.”
Monica has owned the vintage store for three years, and said this was the first instance of brazen theft she and Andy have witnessed.
After the incident, which Monica chose not to report to Police, the woman did approach her to apologise, but Monica fears the public shaming has done little to deter her from stealing again.
“It’s a real struggle right now, and it’s only items worth a couple of dollars, but that’s only from me. What’s she taking from the inside of other people’s places? We’re all doing it real tough at the minute and that’s just not something else you want to deal with.”
According to a survey run by the Thames Business Association released in March, more than 52 per cent of businesses have experienced an increase in crime in the past two years, while 32 per cent said they had been a victim of crime.

Riders to mount up for fundraising trek