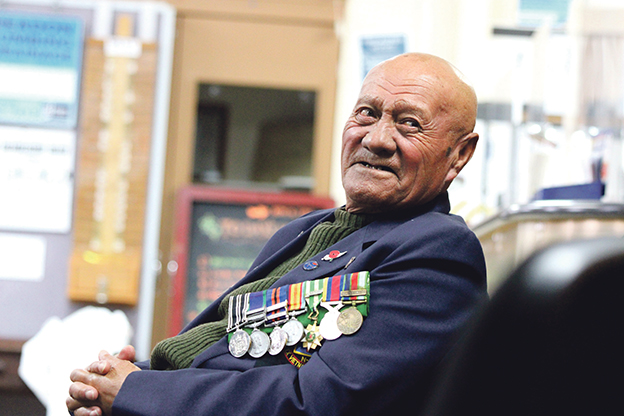 Danny Te Iri says Anzac Day is a time to reflect on those who never came home. Photo: KELLEY TANTAU

Danny Te Iri joined the army after getting a taste of it as a Paeroa College student in the 1950s.
“They had what they called school cadets and every Friday – they’d take us for drills and we’d go out shooting,” he said.
“Then when I left college I joined a power company, who put the power through from Whitianga to a place called Te Rerenga. After that I gave it a miss and I thought I’d go join the army because I had it in my blood.”
In 1963, aged 20, Danny travelled with the New Zealand Regiment to Malaya for the Indonesia–Malaysia confrontation.
“We weren’t allowed to fly over Indonesia, we had to go way up into the Indian Ocean and come back down through the Malacca Strait into Singapore and we caught the train from there to Malacca [in Malaysia],” he said.
“In 1964 we went up on the very rough Thailand-Malaysia border… and we spent three months up there… where I was a lead scout.”
“It’s one job that I liked because I’d rather be out in front where your ears are tuned into whatever’s happening and you could pick up different sounds you weren’t supposed to hear like… reloading a gun.”
Danny said they then returned to Terendak Camp in Malaysia for a four-day holiday, but the battalion was recalled when Malaysia’s Prime Minister declared a state of emergency after Indonesian paratroopers landed on the Malay Peninsula.
“We travelled down to a place called Johor Bahru because that’s where the Indonesian paratroopers had landed. They had troops down there, the Gurkhas, the Brits, and the Singapore Regiment,” he said.
“We’d just come off border patrol… but we turned around and said battalions be ready for action.”
Danny said all fellow soldiers in the heat of confrontation were “terrific guys”.
“We looked after one another, when you were in a strike, they’d pull you out of it, but other than that we worked as a regiment,” he said.
“When you’re in a firefight, anyone who says they’re brave, don’t believe them, because the initial firefight you got a shake, and once you fire that first round, it all comes together and you feel good again.
“It’s either him or us, we try to get the first two shots first.”
Danny was then sent to Borneo along with 300 soldiers to train New Zealand’s next battalion before returning home in 1966.
Three years later, he rejoined the battalion as the sixth commander for New Zealand’s Victor 4 Company in the Vietnam War.
“It was a scary life with the boys because some of them had just come straight from New Zealand,” he said.
“They said: ‘have you got live ammunition?’ I said yes and I said get your bloody head down otherwise it’s going to get blown off.”
Danny said it was “very hard” to witness his mates get killed and injured.
“A lot of our guys got hit between their knees and their belly button by booby traps called punji sticks,” he said.
“[The enemies] grabbed a branch, pulled it round and put spikes on them and next minute you’d trip on them and [the spikes] went right into your stomach.”
Danny said he had no idea of the dangers of the Agent Orange he saw being sprayed from war planes during the war. The chemical defoliant caused many serious health problems to anyone exposed to it, such as cancer and birth defects in their children.
“We were flying out from our taskforce area to the fire support base on helicopters and we looked out and could see these hercules. We thought they must’ve been culling all of the mosquitos but little did we know it was Agent Orange,” he said.
“We didn’t know anything about it until we came home… and learned that if it gets in the water and you drink it, you get cancer… terrible thing.”
Danny travelled back to New Zealand in 1971 and after working at the railways in Ōtāhuhu, Auckland, for ten years, he moved back home to Paeroa in 1981, where he’s lived ever since.
He’s remained a Paeroa RSA member since 1966 and never missed an Anzac Day.
“I look at [Anzac Day] as a time to reflect, not only on myself but all those guys who went overseas, and a lot of them never came back,” he said.