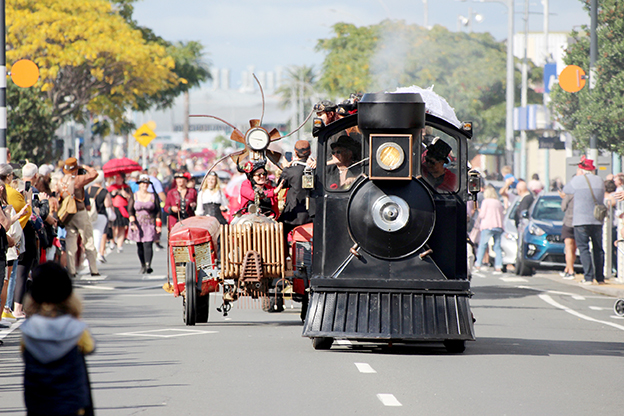 Organisers hope major events like Steampunk and Beach Hop, may get off the ground later this year File Photo: VALLEY PROFILE

Organisers of popular local events were “very happy” to learn unlimited crowd numbers could attend their events after a relaxation of Covid-19 restrictions.
New Zealand moved to Orange traffic light setting on April 14, which means there are no limits for gatherings, though masks still need to be worn.
Beach Hop and Hootnanny Country Rock Festival organiser Noddy Watts told The Profile he was very happy with the government’s decision and as long as New Zealand wasn’t back in the red setting by November, Beach Hop could rev up again.
“Because Beach Hop was held in a public space like the main street of Whangamatā or Waihī or Thames, we couldn’t restrict entry,” he said.
“It was only those who’ve been vaccinated [who could enter] and we weren’t comfortable with doing that with a community event, so traffic light systems when they were introduced last year weren’t going to work for Beach Hop.”
“So we’re happy now that the structure [the government] has got out is that we no longer have to do that… and that was the best news which is great because it’s for the community, we don’t want to be the vaccine police.”
Noddy said the inaugural Hootnanny Country Rock Festival was also “still on the cards” after the three day event set to rock Thames Racecourse in February was cancelled when New Zealand shifted to the red setting on January 23.
“We had to go through the cancellation process after all our hard work but it is what it is and the safety of the community comes first,” Noddy said.
“We were on target for where we wanted to be in terms of ticket sales and we were confident we’d have 8000 to 10,000 people there.
“It was a huge task to go through the cancellation, every ticket holder got a refund, we were lucky enough to receive some financial support from one of the government agencies, so people got paid, which was great.”
Noddy said Hootnanny could take place in February next year.
“We’re very passionate about [Hootnanny]… and all the artists have been fantastic and all the traders that had been booked all want to do it… but we just have to take a breath and re-evaluate things,” he said.
“There were some things we could change anyway that we were maybe too committed to for this year so maybe we can tweak a few things, but we’re not going to commit to [Hootnanny] just yet.”
Steampunk The Thames Circuspunk celebration is now set for November after it was postponed due to Covid-19 restrictions. Committee member Karen Woodhall said while they prefered the event to be held in the green traffic light setting, there was a good chance they would return to a “post-Covid situation” in seven months.
“The last time we had a full [Steampunk] festival was in November, 2019, so the town is ready for this one… it’ll be just what businesses, accommodation providers and the town needs once we get over this hump.”
Karen said because of this year’s committee change, there would be old favourites that were always popular, like the parade.
“Our parade is massive… and we just want it to be fun and bright and for people to participate and come out after hibernation and be visually beautiful because the parade has that reputation,” she said.
“Also a big thing with our parade day is the day trippers, because we have half of New Zealand’s population, being Auckland, Hamilton and Tauranga within an easy drive so… they often come and spend the whole day in Thames.”