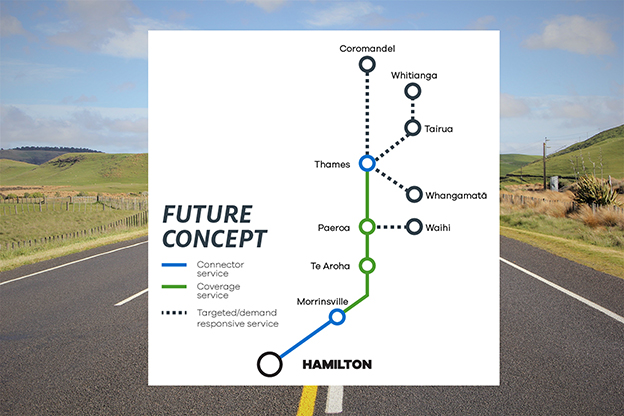 Waikato Regional Council have opened public consultation for proposed new bus services to connect towns in the Thames-Coromandel and Hauraki districts.
A council report said further community consultation would be required for exact routes, bus stop locations and operating times of the service, which could begin in January, 2023.
However, a council report showed possible routes included a return service every two-hours from Waihī to Paeroa and morning and afternoon services between Thames and Te Aroha, with connections to Hamilton.
It may also include connections for commuters from Ngātea and Paeroa into Thames, and routes from Thames to Coromandel, Whitianga, Tairua and Whangamatā.
The buses are expected to be the same size as the Thames Connector bus, and fares may cost as little as $5, with seniors holding a SuperGold Card travelling for free.
The proposed bus services will cost $163,000 in the 2022-23 year if council can secure 51 per cent of the cost from Waka Kotahi NZ Transport Agency (NZTA).
The cost of the service will be funded through a targeted rate for Thames-Coromandel and Hauraki residents.
Coromandel MP Scott Simpson said his electorate was “sadly lacking” in public transport and the proposed bus service was a start but it was late and he suspected it was going to be costly.
“I’m always disappointed when I hear government representatives talking about how they want to have more people using public transport and they want to have fewer cars on the road,” he said.
“When I look around the Coromandel electorate, the opportunity to ride on trains or use public transport is almost non-existent.”
Thames-Coromandel councillor Denis Tegg told The Profile there was a “real appetite” for more public transport.
“Frankly, for people in outlying towns or even in Thames itself getting from Coromandel to Thames or the East Coast to Thames, public transport is just not possible,” he said.
“So all that connectivity and social connection just doesn’t happen.
“Then there’s the added problem with people wanting to get to Hamilton – it’s almost impossible to do that using [current] public transport.”
The consultation also includes the public having their say on whether the proposed bus services are paid for directly through regional council instead of district council rates. This would mean district councils would no longer be responsible for raising public transport funds and passing them on to regional council.
Mr Tegg called this current process “clumsy” and “cumbersome”.
“You’re basically having a lot of confusion in the public as to who’s responsible, so there’s quite a strong support to change that model,” he said.
“The other thing to emphasise is that if the regional council took it over, the rating that the district council imposes would end, so it’s not as if the ratepayers get it twice.”
If the rating changes were enacted following public consultation, the rating for new public transport services in Thames-Coromandel and Hauraki districts would be collected by regional council from July 1.
The proposal is part of Waikato Regional Council’s amendment to its 2021-2031 Long Term Plan. The public can have their say until April 30 before council hold hearings and deliberations on the amendment on May 23 and make their final decision on June 20.
DETAILS: A webinar will be held at 6pm on April 7 to give residents and ratepayers with more detailed information about the proposals and an opportunity to ask questions. To register for the webinar and make an online submission, visit: waikatoregion.govt.nz/yourvoicematters.