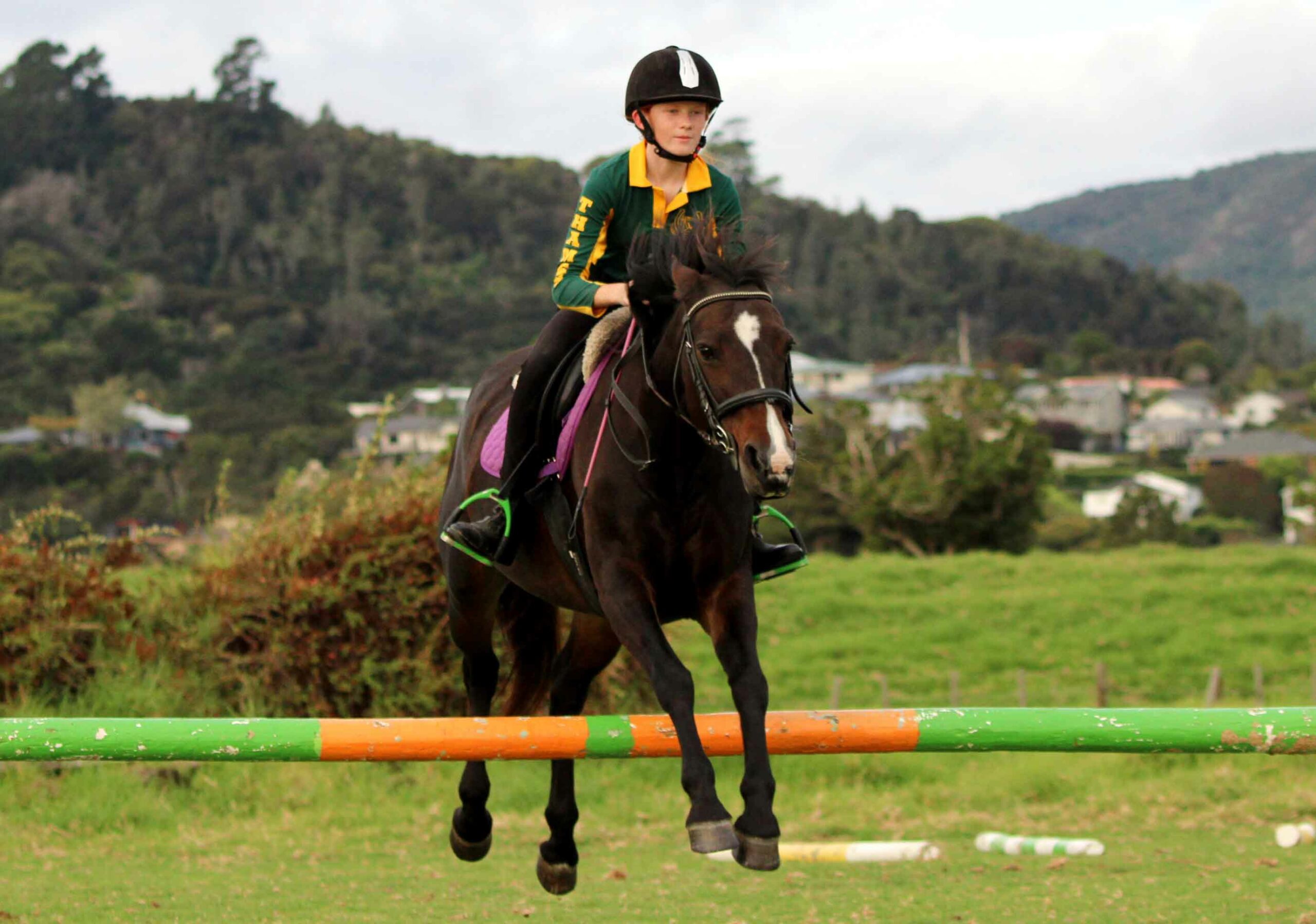 Thames Pony Club is in a fortunate position.
Over the past few years, those involved have grown the club to a level where spaces for new members are limited.
It means there’s a steady stream of young riders to ensure the club’s longevity, as well as a deep talent pool to draw from for events.
“There was a time where we were hoping for new members,” president Katherine Forsyth says, “[but] we’ve had quite a growth in membership over the last season, so we have been having a lot more successes.”
This month marks the end of the season for the pony club, located along State Highway 25 in Thames’ south, and in March, six of its young members successfully competed at Timberlands – a very competitive North Island event that consists of cross country, dressage, and show jumping.
Lucia Suess, Hannah van Derstruys, Lydia Beaver, Sydney Stuart, Anna Hart, and Lily Hart were all part of the team that won the cross country trophy, and the girls also placed third overall.
“It was a very big thing for our club; I’m not sure that’s happened for quite a few years,” Katherine says.
Head instructor Lynda Underwood, whose daughter Heather was one-half of a pair that came second at the National Mounted Games in Hastings in early March, says when her daughter started riding at the club, there were only eight members under the age of 18. There are now around 26 young riders and 15 adult riders.
“We run a ‘Riders without Ponies’ programme early on in the season – September/October – which can lead to new members as they get bitten by the horse bug,” Katherine says.
“Younger riders are great as they ensure the future of the club, as often we lose our senior riders as they go off to university.”
The club is run under the New Zealand Pony Club Association, and has a “high standard of horsemanship”, Katherine says.
Its grounds feature a large sand arena equipped with showjumping jumps, and a large paddock with cross country jumps. The club is also fortunate enough to utilise land up in the Kauaeranga Valley, where they host summer camps and treks.
But while the club’s land, which they lease off Thames-Coromandel District Council and Waikato Regional Council, is in a prime position for spectators along the state highway, there are still those who don’t understand the sport, Katherine says.
“I think some people might not see it as being a particularly important thing to have in the community, but I tell you what, a pony club is an amazing thing to have for the kids of the town,” she says. “We’re like a big family and it’s so neat for kids to be able to come here and enjoy their ponies and enjoy their friends.”
Club secretary Janet Stuart, who rode with Thames Pony Club as a child in the 80s, agrees. “I think there is a perception that horse riding is all about money and appearances, but I think our club is a good, old-fashioned, grassroots club where we try to support kids in whatever discipline of riding they want to do.”
Katherine, who has been president at the club for three years, also did the “whole pony club thing” when she was a child. Now, her children, Amber Forsyth-Lees, 17, and Tamzin Forsyth-Lees, 13, are riding, too. “My mum and dad both rode horses and nurtured a love for them in my sister and I, who grew up owning ponies. It’s nice to continue that family tradition with my own daughters,” she says.
“Just looking after a pony teaches a child so many things. They’re very big animals, so you have to build up an understanding of how they work and it’s good to learn that responsibility.”
And while the club’s growing numbers offer an array of benefits, there are also challenges.
When holding rallies (lessons) or events, members can feel the squeeze of the small grounds, and have to navigate the obstacle of where to park all the horse floats.
It can also be difficult to find grazing and equipment for larger numbers of members, but the club was working on “different options and solutions for the future”.
“I’m proud of our little club and its history in the area,” Katherine says. “I enjoy seeing the companionship the children have with their ponies and how they grow in confidence.”
CLUB PROFILE: Want to be part of the Valley Profile’s new Club Profile series? Email details to kelley@valleyprofile.co.nz.