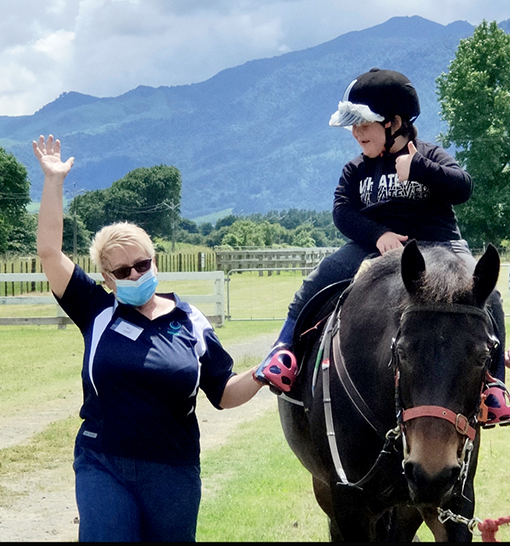 Paeroa boy Keaton Bonser-Hooton has loved riding horses since he was two.
The seven-year-old Goldfield’s School pupil has been attending Riding For the Disabled (RDA) sessions for around five years, and mum Laura said the positive effects of riding horses has had on her son’s life had been “absolutely huge.”
“Keaton has down syndrome and we wanted him to get the therapy benefits of riding for disabled,” she said.
“Keaton does a lot of core strength work, a lot of co-ordination, which is helping him with his growth and his fine motor skills.
“He learns to communicate because he’s got to talk to the sidewalkers and listen to them… and it helps him with animal awareness as well, they get to pat the horses and help out.”
Laura said Keaton had also gained strength in his stomach muscles, which had improved his balance.
“Everything about it has just changed him being able to be active, he can do something he loves doing – because he’s not the most co-ordinated as far as running and ball throwing goes,” she said.
Te Aroha RDA provides therapy riding for those with physical, mental and emotional disabilities from throughout Hauraki, Coromandel and eastern Waikato. It has around 65 riders each school term, with sessions taking place at its centre at Waihou Recreation Reserve four days a week.
RDA treasurer Georgina Lloyd said the charitable organisation was currently fundraising to cover costs and build new facilities.
This Easter weekend, several Komata farms just north of Paeroa will play host to the organisation’s annual fundraising trek, which will be held on a marked trail over easy hill country between 10am and 2pm on April 16.
“A lot of [that money] goes towards operating expenses, this year we’re probably going to try and target fund it,” she said. “We’re looking to build an outdoor arena for the RDA.”
The RDA decided to hold the fundraising trek again after last year’s success, which Georgina said raised around $1500.
“It’s one of our main fundraiser events for the RDA, we held it last year and it was relatively popular, with a lot of positive feedback so we thought we’d host it again,” she said.
“We have very generous land owners that have allowed us to use the farms for the ride. It’s a 15km loop with a bit of varying terrain, and basically just good fun.
“The main thing is to try and get as many people as we can to the fun ride.”
DETAILS: The fundraising ride costs $30 per rider and will take place on April 16 over a marked loop track between 10am and 2pm. There will be spot prizes, a sausage sizzle and refreshments, which can be purchased on site. Camping is available, with guided treks offered on Easter Sunday and Monday. All funds raised will go directly to Te Aroha Group NZRDA.
REGISTER OR DONATE: email georgina.eliz@gmail.com.