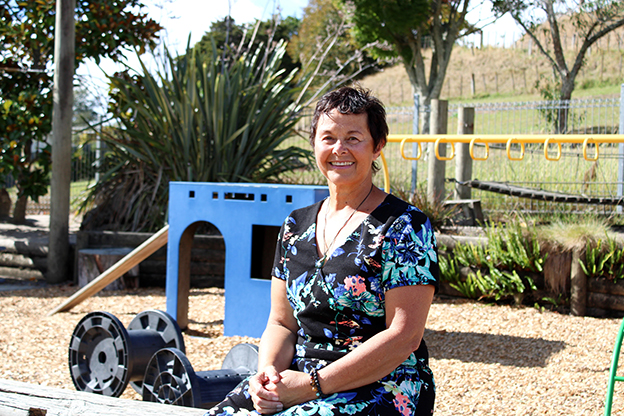 Glenys McKain has resigned from her post at Central Kids Paeroa after 29 years. Photo: KELLEY TANTAU

A kindergarten teacher who has consoled, danced, and sung with hundreds of Paeroa children over the course of 29 straight years has officially hung up her hat.

Glenys McKain’s last day teaching at Central Kids Paeroa was on Tuesday. Now she hopes she doesn’t find herself staring at the fridge, wondering what to do with her days.
Glenys, who lives in Te Aroha, actually started teaching at Central Kids in 1978, after graduating from teachers college in Hamilton.
She worked there for little more than two years before she left Paeroa to teach in Whakatāne.
“I had planned on travelling overseas after two years… but I just enjoyed it so much that overseas never happened, and I continued teaching,” she told The Profile.
She returned to Central Kids, on the corner of Arney and Wood Sts, 29 years ago, and has stayed ever since.
“I did either want to work with children, or be a vet – children or animals – and what do they say? Never work with children or animals?” she joked.
“But it’s what I do, it’s who I am, and coming back to a place where you first started… those children have now started turning 49.” Glenys has taught second generation families, and said the children were a “joy” to be around.
“There’s no judgement with children, and they say such beautiful things and are such curious, creative people. What other job can you come to where you can have a laugh, you can dance, you can sing, you can run? You can be who you want to be.”
She was part of a teacher exchange that took her abroad to South Korea for four weeks, and, in 2010, she was a member of the Central Kids Paeroa team to win five awards from the organisation – with Glenys taking home the supreme award.
Throughout her tenure, she has stepped into the roles of nurse, counsellor, and confidante, and said it would take a bit of adjusting to adapt to life outside of the kindy.
“I’m really proud of what we’ve achieved here at Paeroa… one person doesn’t make a place on their own, so I will miss that camaraderie.
“I’ve kind of taken a leap of faith,” she said.
“I just came to the realisation that it was important to have some ‘me time’, to catch my breath, and spend time with my mum who is elderly.
“There are going to be days when I’m like: what am I going to do with myself? But I don’t know, because I’ve never had this opportunity.”
Although Glenys has resigned from her position at Central Kids, she still has a spot of relief teaching up her sleeve. “I’m going to be real emotional, but I just know it’s the right thing for me to do.
“It’s a cliche, but I want to leave knowing I’ve given it everything I’ve got.”