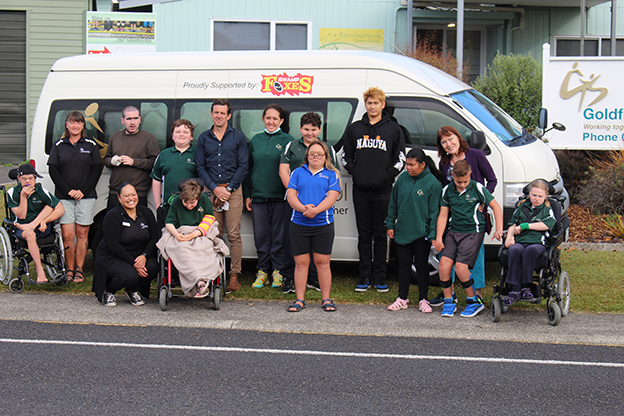 Paeroa’s Goldfields School has a new set of wheels thanks to a $30,000 donation by Thames Valley Rugby Union.
Principal Cameron McKenzie said the modified van, which carries seven students including two in wheelchairs, was “great” and would be “very important” for Goldfields.
“There are 85 students all with different learning or physical disabilities but the students with physical disabilities are the ones who have the most trouble accessing the community, so that’s why the vans are so important.
“We take the students out on community visits, we take them to supermarkets, we take them to work experience, and we go to parks, so it’s a big part of our lives,” he said.
“The school’s grown over the last few years, and our needs have changed but we’ve got a big drive to get out into the community for the students and it’s been a good year in the making.”
Goldfields received the $30,000 donation from Thames Valley Rugby Union last year with the main source of it coming from an auction that included a Swamp Foxes jersey designed by Goldfields students.
Mr McKenzie said when the Swamp Foxes announced their donation for the school, he decided the best place to spend the money was on a “big ticket item”.
“We asked them if it was okay that we use that money to contribute to pay for half the price of the van which was around $60,000,” he said.
“Swampfoxes were really happy to contribute in that way, because it directly affects the students and their schooling.”
Mr Mckenzie said the new van also featured the Swamp Foxes logo for the school to acknowledge their support.
“[The Swamp Foxes] thought that was a really nice idea, they’ve supported us now for five years so we just wanted to show people that we’re proud of that partnership,” he said.
“Thanks to the Swamp Foxes for their ongoing support and we really appreciate them thinking of us, all students would like to say thank you and we’re proud to have their logo on the side of our van.”