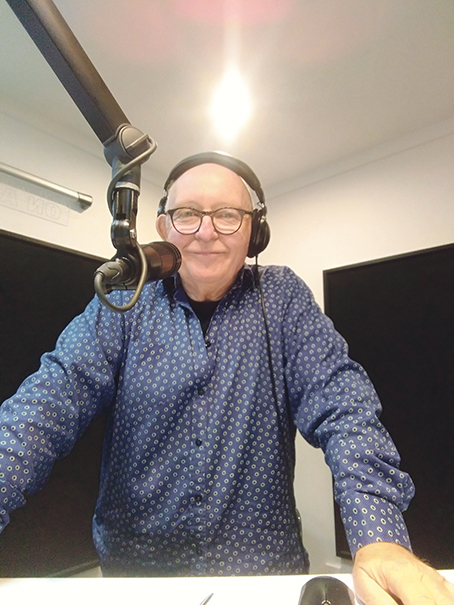 Rex Simpson is sitting in a Turkish cafe along Karangahape Rd. The change in scenery from the quaintness of Paeroa to the vibrancy of Auckland comes at the perfect time for the radio station presenter.
“There is not a huge opportunity to be able to use your Gold Card around the Coromandel Peninsula,” he says. “Here, there’s lots of opportunities to be more mobile in my later years.”
The 68-year-old has hung up his headphones after years of working on radio, most recently for Coromandel’s CFM.
He took the leap and sold his Paeroa property to purchase an apartment in the centre of Auckland’s thriving CBD, where he’s now able to go to the orchestra, the art galleries, the cinemas, and sample cuisines such as Indonesian street food.
But the children’s show creator responsible for the Saturday-morning favourite What Now? is also writing a book, and he’s keeping to a strict schedule of writing or researching between 6am-1pm, then a stint at the gym, before stopping for coffee.
He hopes to have the first draft of his book, to be titled Follow the Little Green Man, completed by July.
“I was travelling quite a lot overseas when I was head of children’s programmes for TV3, and more particularly when I had Kids TV, and I was buying and selling children’s programmes,” he says. “I never liked to travel direct, so I’d stop in Singapore or Hong Kong or Bangkok, and fly on to London, New York, and Los Angeles.
“I didn’t necessarily know where I was going to be… and I would come out of the hotel and go to the first set of traffic lights and wherever the little green man said I should go, I would follow. Variably, I would end up somewhere interesting with interesting people.”
When Rex began thinking about his life and his book, he realised intuition had always been his guide, as well as a little naivety.
“I think the thing that I’ve learned is that I am completely naive, and if I had thought too deeply about the consequences of the actions I took, I would’ve never done them,” he says with a laugh.
Rex’s career in radio began back in Gisborne when he was just a teenager.
He “surprisingly” won a radio DJ competition that gave him a sort of “celebrity status” around town. Before that, though, he’d already been practising his announcing with his hairbrush as a mic.
He joined Television New Zealand in Wellington as a presentation director in 1976, before moving to Dunedin two years later.
He’s been the brains behind children’s television shows such as Nice One Stu, Howz That?, You and Me, and What Now? – the latter of which has been on New Zealand television for 40 years.
He was also the production manager for The Renovators, as well as Praise Be – a “hymn request” programme he primarily made for his adoptive parents.
A former Thames-Coromandel district councillor and board member, Rex joined Coromandel’s CFM in March, 2020, just as the country went into its first Covid-19 lockdown.
When Dave Cull, an ex-Dunedin mayor Rex worked with on The Renovators, passed away in 2021, it provided Rex with a dose of perspective.
“If you put your life on a yardstick and you looked at how much had gone past and how much you had left, you’d see you only had a small portion of your life left to live,” he says.
“When Dave died, it was a bit of a wake-up call for me to think about if I was living the life I wanted to live.”
Rex says he is “so privileged and grateful” to have had the career that he has had, but that the time had come to hang up the headphones.
“We aren’t the sum total of the work we do,” he explains, “we’re the sum total of the people we are.”