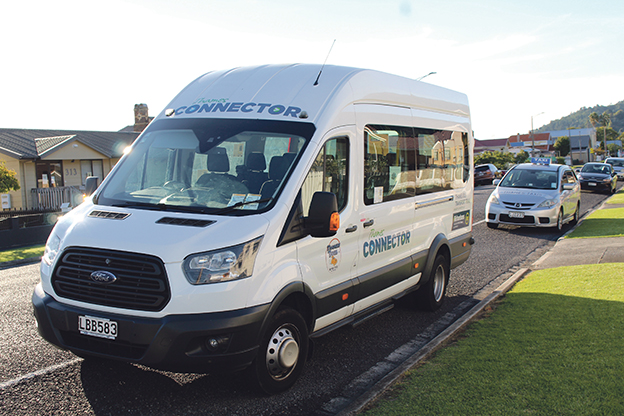 The new buses are expected to be the same size as the existing Thames Connector bus, and fares may cost as little as $5. Photo: GORDON PREECE

Locals could be riding electric buses with bike racks if Waikato Regional Council’s proposed new bus services are given the green light.
Waikato Regional Council held a webinar on April 7 as part of its public consultation on proposed new bus services for Thames-Coromandel and Hauraki, which could be up and running by January next year.
The proposed new bus routes include a return service every two-hours from Waihī to Paeroa and morning and afternoon services between Thames and Te Aroha, with connections to Hamilton. They may also include connections for commuters from Ngātea and Paeroa into Thames, and routes from Thames to Coromandel, Whitianga, Tairua and Whangamatā.
A Waihī to Tauranga route was also proposed at the webinar.
Council regional transport connections director Mark Tamura told those on the webinar electric or hybrid options were being considered for the new buses.
“We regularly have to retender for public transport contacts and it’s becoming part of our norm to request proposals which provide zero emission options,” he said.
“Waka Kotahi [NZTA] has an expectation that all vehicles post 2025 that are entering the public transport fleet will be zero emission, so we’re taking that very seriously and we’re currently investigating options for buses.”
Mr Tamura said bike racks for buses would also be considered, along with accommodating students with schooters or skateboards.
“In our regional services which connect between towns, we have bike racks on all those. In those urban services, one of the challenges is the loading and unloading times… which can delay the service… which impacts the timetable, reliability and journey times,” he said.
“We’re constantly looking at the review in these types of approaches, and we would encourage you to make your feedback now if you feel strongly about them.”
Thames-Coromandel regional councillor Denis Tegg said during the webinar that people may also be able to travel by bus from Turua to Thames and Paeroa.
“The services would run from Paeroa through Ngātea and then it would come back to Turua and on to Thames and vice versa.”
The buses are expected to be the same size as the existing Thames Connector bus, and fares may cost as little as $5, with seniors holding a SuperGold Card travelling for free. The service will cost $163,000 in 2022-23 if council can secure 51 per cent of the cost of the proposed bus service from NZTA. This will be funded through a targeted rate for Thames-Coromandel and Hauraki residents.
The bus proposal is part of Waikato Regional Council’s amendment to its 2021-2031 Long Term Plan.
The public can continue to have their say until April 30 before council holds hearings and deliberations on the amendment on May 23 and make their final decision on June 20.
DETAILS: To make an online submission visit: waikatoregion.govt.nz/yourvoicematters.

Riders to mount up for fundraising trek