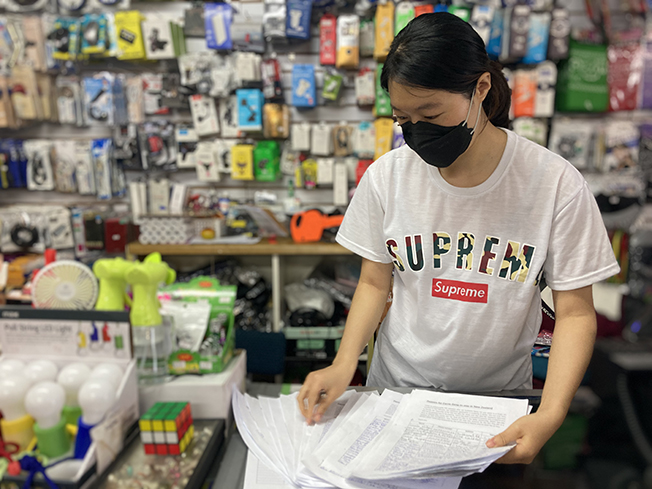 Carrie Geng with the 700-plus signatures received for a petition asking Immigration New Zealand to keep her in the country. Photo: KELLEY TANTAU

Good news could be just around the corner for Carrie Geng, who feared deportation following her husband’s tragic death in February.
Now, progress has been made to grant a residency, though by Monday morning, it hadn’t been made official, Carrie told The Profile.
Carrie, 30, and her husband Henry Lin were both injured when their car crashed into a tree along Puketaha Rd, east of Hamilton, in February.
Henry subsequently died from his injuries, aged only 31.
Carrie is originally from northern China, but has lived in New Zealand for eight years.
Last week, she told The Profile her partnership visa was set to expire this month, and that her residency application was in its “final few steps when Henry was taken”.
That meant her New Zealand residency application was suddenly “in limbo”.
Immigration New Zealand’s general manager border and visa operations Nicola Hogg told The Profile that the agency empathises with the stress caused by the loss of a loved one.
“Unfortunately, in these circumstances when the principal applicant passes, and there’s a residence application open, the secondary applicant is advised that they will need to reapply as the principal applicant.
“If the secondary applicant was dependent on the principal applicant for their right to remain temporarily in New Zealand, they are then given an opportunity to consider what changes to their visa status they will need to make to become eligible as a principal applicant.”
Nicola said in the past when such situations have occurred, the application may be referred to a delegated decision maker who may decide to grant residence or temporary status changes.
“Immigration New Zealand works hard to be as facilitative as possible in these types of difficult circumstances,” she said.
Carrie said an official residency visa hadn’t been granted as of Monday morning, but she is optimistic about the outcome.
In the meantime, more than 700 people have signed a petition asking for Carrie to be able to stay in the country.
Signatures had been obtained from Te Aroha, Waihī, as well as the local community.
“All the people have shown their support, shown a big hug to me, and support me being here. Every day, they come in and buy something small and tell me it’s good to have me back,” she said.
“I can’t make a big contribution to the whole country, but I’ve contributed to this local community. That’s what I can do, and I try my best.”
Carrie started work at Coin Save Paeroa six years ago, after studying business in Auckland.
It was in the city where she and Henry wed little more than two years ago at Settlers Country Manor.