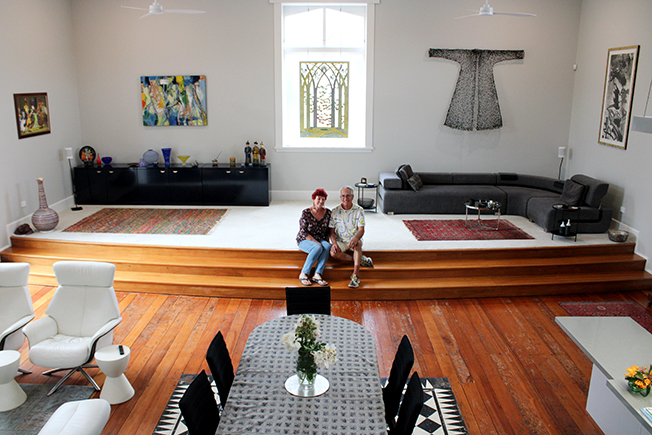 Linley Rose and John Eaglen were taken aback by the finishing inside the masonic hall in Paeroa. Photo: KELLEY TANTAU

You wouldn’t expect to find a modern kitchen inside a masonic hall, nor a Shanghai artwork made of wire and beads.
You probably wouldn’t expect to see roses adorning the front entrance, but in Paeroa, the historic Ohinemuri Lodge is being carefully carried into its new chapter by experienced creators of space.
With no connections to Freemasonry, John Eaglen and Linley Rose visited the lodge on the corner of Arney and Willoughby Streets three days before it went up for auction in 2021.
What they saw astounded them.
“We love buildings with a difference, and our first impression was the finishing in here – we thought it was superb,” Linley told The Profile.
“We also liked the fact it was a blank slate outside,” John added.
The couple said they were grateful for the building’s former owners, Karen and Alison, who had the “courage and vision” to turn the Hauraki District Council Category A historic site into a home, as well as builder Ian Buchanan.
All of the renovations had to be made in partnership with Heritage NZ, they said.
According to the Ohinemuri Regional History Journal, the lodge was opened in July, 1896. By December that same year, an urgent need emerged for the lodge to have its own building, which was later constructed on Normanby Rd.
However, disaster struck on the morning of August 3, 1918, when the lodge’s building was completely destroyed by fire.
The new building, on the corner of Willoughby and Arney Streets, was built in 1919.
It was purchased by John and Linley at the end of June last year, and by October, they were already planting the first plants at the front of the property.
They knew they wanted roses, as well as a mix of “formal gardens and informal natives”, but they enjoyed working collaboratively with landscape designer Trish Bartleet to hone the design, which includes a grand brick fence facing out on to Arney St.
“The bricklayer was brought up in Sydney, and his father was a mason, so all through his growing up, all the birthday parties and all the events in the family were held at the masonic hall,” John said.
The couple have now turned their attention to the back garden, which will feature an ornate path, an avenue of trees, a private courtyard, a fish pond and bridge, a pergola, and a Japanese garden with bamboo, maples, camelias, and magnolia.
To fill the space, plants have been shipped up from across the country.
“It’s a lot of work and commitment, and it takes a lot of project management to keep things moving along,” Linley said. “You’ve got to be resourceful.”
The creative duo have backgrounds in design and architecture, with John also building stage sets for more than 80 operas and plays – some of which were “zero budget stuff” that required a lot of “problem solving”, he said.
They’ve undertaken big projects together and separately, including renovating apartments in Auckland, and the deconstruction and reconstruction of a prominent villa.
They also own a well-known property in northern Coromandel, famous for its ‘big tomato’.
“We’re used to doing things that are noticed,” John said.
And utilising space is something the pair encourage others to do more of.
“Every square foot of space costs you a lot of money so it should be working for it. You shouldn’t have any spaces in your house that are not a joy to pass through or to be in,” John said.
The pair couldn’t pick a favourite spot in the house – which also features a foyer with original freemasonry items that were gifted to the building – but said they thanked Paeroa residents for their interest in the home.
“Thank you for being enthusiastic and caring about our garden,” Linley said. “Every day we’re out there people stop and say: ‘love what you’re doing; what have you planted there?’ Everyone wants to be involved in it… and we are the caretakers.”